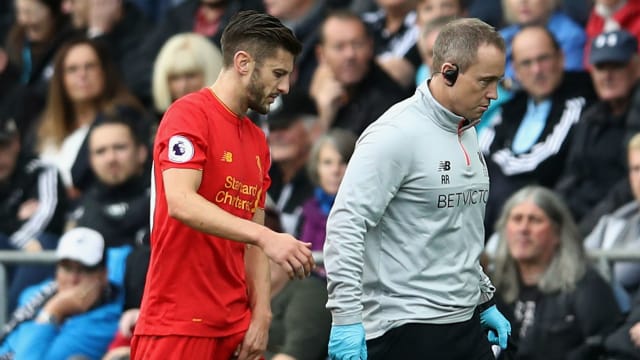 Jurgen Klopp is confident Adam Lallana and Dejan Lovren will be fit to face Manchester United after the international break, with the pair having suffered groin injuries against Swansea City on Saturday.

Liverpool's fourth consecutive Premier League win came at a cost, as Lallana was taken off in the first half and Lovren concluded the game in some discomfort.

Manager Klopp conceded the pair were unlikely to join up with England and Croatia respectively for forthcoming World Cup qualifiers, but felt they would be back for a crucial derby showdown with Jose Mourinho's men.

"Dejan was one of the last moments of the game. [It is a] groin [injury] for both, hopefully not that serious," Klopp said.

"Adam felt it, tried it again and it didn't work. In this moment they have no chance for the national teams.

"But hopefully 16 days should be enough to bring them back onto the pitch for the next game.

"Things like this happen - there was no sign of it in the week. The pitch was a little bit wet, of course, so things like this can happen. It's not too nice, but nothing else."

The Reds recovered from Leroy Fer's early opener, with Roberto Firmino levelling matters after the break and James Milner netting the winner from the penalty spot six minutes from time.