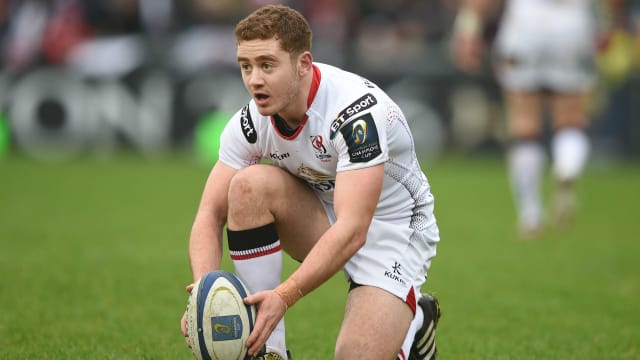 A last-minute penalty from Paddy Jackson secured a dramatic 9-7 win for Ulster against the Ospreys at Kingspan Stadium.

The result saw the hosts maintain their perfect start to the season and cement their place at the top of the table, while it marked a second straight defeat for the Ospreys who were beaten by Leinster last time out.

The Welsh side led from the fifth minute when Nicky Smith found the line and Dan Biggar added the conversion, but Jackson's three successful penalties eventually enabled Les Kiss' men to snatch the victory.

A late penalty also helped another Irish province to victory over Welsh opposition as Leinster overturned a 13-3 half-time deficit to defeat the Cardiff Blues 16-13.

Gareth Anscombe scored all of the home side's points at the Arms Park, converting his own try and kicking three penalties.

But it was not enough to secure a fifth successive win for the Blues as they were held scoreless in the second half and lost key back-rower Josh Navidi to a yellow card.

Rhys Ruddock's 49th-minute try and Jonathan Sexton's third successful penalty on 70 minutes ultimately sealed Leinster's win which moved them up to third in the table.

Five-pointers from Conor Murray, Simon Zebo, Stephen Archer and Darren Sweetnam, plus a penalty-try completed the scoring for the Irish side.

And there was a further boost for the hosts as skipper Peter O'Mahony came off the bench to make his first appearance since suffering a knee ligament injury at last year's Rugby World Cup.

The Scarlets chalked up just their second victory of the season as they defeated Benetton Treviso 22-6 at the Stadio Monigo.

After trailing to a Tommaso Allan penalty at the break, second-half tries from replacement prop Werner Kruger, wing DTH Van der Merwe and centre Steffan Evans sealed the points for Wayne Pivac's side.