Ryder Cup Recap: European surge leaves all to play for 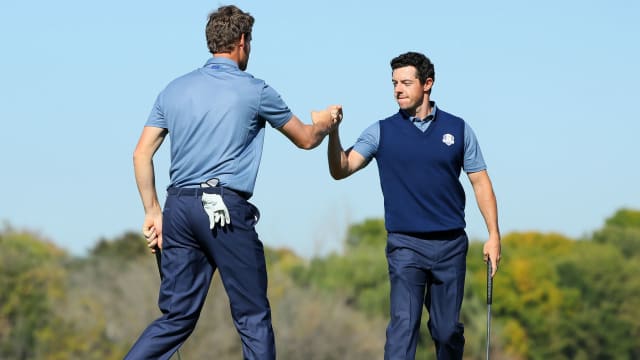 Europe produced a courageous comeback in the second session of the Ryder Cup to ensure they will begin Saturday trailing by just two points at Hazeltine.

Davis Love III's United States team made the perfect start on Friday, completing a clean sweep of the opening foursome contests - the first they had done so since 1975, when the late Arnold Palmer served as captain - to seize a commanding lead.

That left Europe in desperate need of a response, but it duly arrived in the form of three victories in the afternoon fourballs, reducing the USA's overall lead to 5-3.

Henrik Stenson and Justin Rose turned the tables on Patrick Reed and Jordan Spieth in a repeat of the morning's first match, the Swede particularly strong as he contributed significantly to a 5 and 4 triumph.

The all-Spanish pairing of Sergio Garcia and Rafael Cabrera Bello beat JB Holmes and Ryan Moore 3 and 2 despite a late rally from the American duo, while Rory McIlroy and Thomas Pieters triumphed by the same margin against Dustin Johnson and Matt Kuchar, who had won comfortably earlier in the day. McIlroy closed proceedings with a tremendous eagle at the 16th and a passionate celebration that summed up Europe's upturn in fortunes.

Those successes meant the USA were grateful to Brandt Snedeker and Brooks Koepka. They played superbly to inflict a 5 and 4 loss on Danny Willett and the lacklustre Martin Kaymer, securing the only home win of the afternoon.

"It makes it sweeter when you beat the guys you lost to in the morning, that's for sure," Stenson on a day of mixed fortunes.

"Brooks did a great job of making me look good," Snedeker plays down his own contribution in an interview with Sky Sports.

Blue on the board.... #TeamEurope

There were birdies aplenty in the afternoon, but Stenson arguably got hotter than anyone as he birdied the sixth, seventh and eighth to leave Reed and Spieth in trouble. The Open champion almost claimed a hole-in-one at the eighth, courtesy of a shot that epitomised his stellar iron play.

FedEx Cup champion McIlroy rounded the day off in style, eagling the 16th to put a third European point on the board, before cheekily bowing to the partisan American crowd.

- The European team may have failed to deliver in the foursomes, but their subsequent fightback proved they certainly do not lack character. Nevertheless, Darren Clarke's men still have much work to do.

- Europe's rookies are more than capable of having a positive impact. Having been let down by Lee Westwood in the morning, Pieters bounced back emphatically in the company of McIlroy, while Cabrera Bello formed a fine partnership with countryman Garcia. Andy Sullivan had also impressed earlier in the day, despite suffering defeat, while Willett's debut loss owed much to a lack of support from Kaymer and the superb form of Snedeker and Koepka. Chris Wood and Matt Fitzpatrick are set to feature for the first time on Saturday.

- In Ryder Cups, you should always expect the unexpected. Few could have anticipated a US whitewash in the foursomes and it was also a surprise to see the hosts give up the momentum so swiftly later in the day.

- Reed is a key man for the USA. Stenson and Rose may have inflicted a first Ryder Cup defeat on the Texan, but he looks made for this competition.