Celtic are lucky to have Dembele - Rodgers 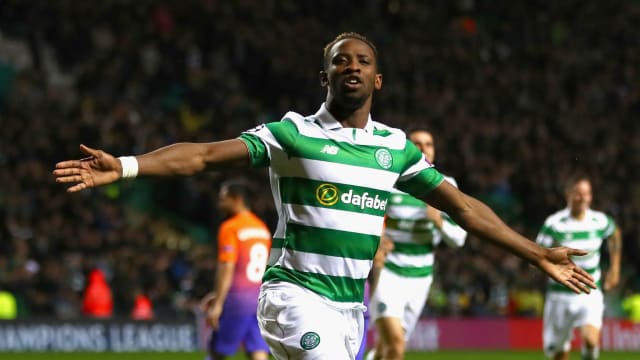 Celtic manager Brendan Rodgers heaped praise on Moussa Dembele after the forward scored twice in a 3-3 draw against Manchester City in the Champions League.

Dembele opened the scoring at Celtic Park after just three minutes, and he was on target again within 72 seconds of the second half to make the score 3-2.

City fought back three times to level the match, with goals from Fernandinho, Raheem Sterling and Nolito, but Rodgers focused on his talented 20-year-old afterwards.

"We're fortunate to have him," Rodgers said of Dembele. "He was coveted by a number of teams but his agent is a clever guy.

"Does he go to a so-called better league and sit on the bench and not get so many games, or does he come to a big club with an opportunity to develop and invest some time into his development, and then step up if that's what he wants to do?

"He really bullied the back four, but he's more than that - he's got a wonderful touch.

"You saw his agility for the third goal. He's a huge talent."

He said: "We're disappointed with the goals we conceded. We can analyse all three and we can do better. They got a bit lucky with the first one.

"I thought the performance of the team was absolutely outstanding at this level, to perform like that. The players deserve great credit. To play against Manchester City and perform like that, it was incredible.

"A very small percentage of us feels we could have done better with the goals, especially the second and the third. Everything else was outstanding."

Rodgers also gave credit to the Celtic fans, who created an intimidating atmosphere for the Premier League leaders to play in.

"It's a noise I've not heard since I've been up here," said Rodgers.

"I've played around the world, in great atmospheres, but this is sheer passion. When the supporters and team are at that level, it's very difficult for a team even like Man City.

"It's really like a 12th man. They helped us produce the performance that we did."