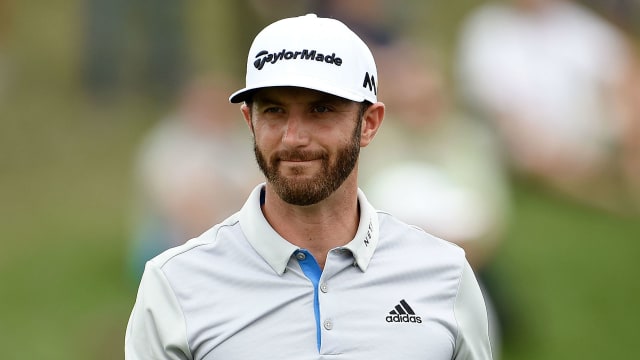 Davis Love III is seeking to steer the USA to a first Ryder Cup triumph since 2008 at Hazeltine this week.

Here we take a look at the 12 players charged with delivering glory on home soil.

Johnson plays some of his best golf in the game's biggest events, and the Ryder Cup is no exception. Electrifying off the tee and humble off the course, Johnson is a fan favorite who will certainly spark some life into the home supporters. With am unblemished 2-0-0 singles record and a dominant PGA Tour season (15 top 10s), Johnson will likely be pitted against Europe's hottest golfer on the final day. If his putter is cooperating, few can beat him. Despite a common misconception that he isn't the toughest mentally, Johnson persevered through a rules mishap at the U.S. Open to earn his first major title.

Spieth has struggled with his ball-striking this season. He has fought through hooks and slices off the tee and even his magical putting has dwindled since three glimmering rounds at Augusta. Still, the talent is there and Spieth can comfortably be paired with anyone because of his easy-going nature and versatility on the course. Make no mistake, Spieth still had a tremendous season, finishing with 10 top 10s, two wins and two runners-up. However, he set the bar high last season winning two majors and the FedEx Cup, and he did fall short of expectations after an improbable Sunday collapse at the Masters. After skipping the Olympics and calling the Ryder Cup the Tour's "fifth major", Spieth should be charged up and ready to go.

Reed, simply put, is a warrior on the golf course. He plays with a natural aggression and gritty determination one would normally see in a boxer. When he's in a match-play event, he's ready for battle and he will not let anyone intimidate him. The former Georgia and Augusta State star has been one of the most consistent players on Tour this season, accumulating 12 top 10s and another five top 15s. Though he has yet to win his first major, Reed is quickly sneaking up on the top five in the world rankings. There are no gaping holes in Reed's game, so pairing him with one of the longer hitters could free him up to play more aggressively from the fairway and on the greens. Reed and J.B. Holmes would make an intriguing duo.

Now that Fowler's on the team, what will captain Love do with his mercurial young star? Many were surprised to hear Fowler's name called in the first wave of captain's picks, but he does have four worldwide wins in the last year and a half. Regardless of his current form, Fowler is a popular player on the team and an obvious fan favorite. Atmosphere is key at the Ryder Cup, where momentum can turn rapidly. Fowler should get everyone on their feet, even if he isn't playing his best golf. Fowler was solid with Jimmy Walker two years ago, but he may be an option to team with Phil Mickelson this time around. The two are friends and could work well together while providing a spark for fans.

Mickelson did everything but win this season, while climbing 20 points in the world rankings. Lefty was a three-time runner-up this year, including a spectacular showdown with European Ryder Cup member Henrik Stenson at the Open. It would be enticing to see the two paired together for their singles match. No one on either team has as much Ryder Cup experience as Mickelson. Though he doesn't boast the best record, he is amiable with the crowd and his younger team-mates. Putting and driving accuracy have been Mickelson's two weaknesses throughout his career, so someone like Spieth could be a good compliment in foursomes or fourball. Fowler will likely be his partner, though.

Walker was a forgotten man this season before holding off Jason Day at Baltusrol to win the PGA Championship. He went 11 straight starts without recording a top 10 during the summer before capturing his first career major, but he has continued his fine play into the play-offs (third at Deutsche Bank Championship and 13th at BMW). Despite having limited Ryder Cup experience, Walker and Fowler fought their way through a couple of hard-earned halves in 2014. Walker possesses the perfect combination of length off the tee and touch on the greens when in form. It would be interesting to see Walker paired with Brooks Koepka. Both players bomb it off the tee. Walker is the better iron player, which would allow Koepka to play aggressively tee-to-green.

There's nothing flashy about Kuchar or his game, but he has been one of the most consistent Tour stars for close to a decade. The top-10 machine doesn't have a strong record in some of the game's biggest events. It's the most glaring weakness on his otherwise shiny resume. It's not surprising Kuchar has fared best in fourball competitions, because he is a versatile player that can pick up his partner's slack anywhere on the course. However, he needs to come up big in his singles match this year. Though Kuchar could be paired with anyone without a hitch, Brandt Snedeker would be a solid option because they are both controlled ball strikers and solid around the greens. They could give Europeans fits as a tough tandem to pick up holes on.

Hazeltine is one of the longest courses players will see this year, which is why selecting Holmes as a captain's pick made so much sense. Though consistency hasn't been his strong point this season, Holmes has shone brightest in some of the biggest events. With top-five finishes at the Masters, Memorial, British Open and the BMW Championship, Holmes has proven he can compete against the world's best players. His driving accuracy suffers at times, which puts him in poor spots to score. He might do better in fourball than foursomes. Holmes is a viable option to be paired with almost anyone because of his length off the tee, but playing him with a good wedge player is a must. Zach Johnson or Spieth would be his best bets.

Koepka is one of two Ryder Cup rookies competing on the US squad this year. Despite battling a bad ankle injury during the heart of the American summer, he still compiled two straight runners-up and a tied-fourth at the PGA Championship. Koepka can make up for his inexperience with his length off the tee, which will be a premium at Hazeltine. After a disappointing play-off run, that was cut short after the BMW, Koepka will be trying to rebound at his first Ryder Cup. It will be interesting to see just how much Koepka plays. If Love is feeling cautious, he may choose to hide his rookie and play him sparingly. If Koepka looks sharp in practice rounds, he may pair him with Mickelson or Reed - two people Love knows will be ready to play.

Unfortunately for Snedeker, his lone Ryder Cup appearance ended in heartbreak when the Europeans mounted an improbable comeback at Medinah in 2012. Snedeker was one of the players that lost his singles match that year, so he will be hungry for redemption. Despite being regarded as a consistent player, Snedeker went through a stretch of four missed cuts in six starts from April to June. He started the year with a third-place finish, runner-up and then a win. When his putting is on, he is tough to beat. Snedeker may not be the longest hitter on tour - or the most accurate - but he is a great iron player and a fierce putter when in form. He would be a great partner for Dustin Johnson or Jimmy Walker because he would provide balance to their strengths.

Johnson has been very quiet since posting three straight top-12 finishes in the middle of year. He has failed to finish inside the top 30 in his last six starts. However, he is a big tournament player that should be counted on to produce as a four-time participant. It's hard to count him out. No one thought he'd win the British Open last year, pitted up against the likes of Spieth, Jason Day and Adam Scott, but he outlasted them all to win his second major. If Johnson can bring that same mentality into the Ryder Cup, he could help USA end its drought. A Johnson-Johnson pairing is a match made in heaven. It should be used every day. It's the easiest decision Love has to make. Dustin is a masher off the tee and solid long iron player, while Zach is a master with his wedges and solid on the greens. If the two combined their talents, they'd win every event on Tour.

With a spirited effort down the stretch, capped by a dramatic duel against Rory McIlroy during the final round of the Tour Championship, Moore was more than deserving of the final, late pick. He's a gritty competitor that hits quality iron shots and make a number of clutch putts. It's surprising Moore has never played in a Ryder Cup, because he has won five times on the PGA Tour in the last seven years. He may not be the flashiest player, but Love selected him over Bubba Watson and Justin Thomas because he's consistent and reliable. Moore, like so many of the players on this team, can be paired with anyone. Though he isn't an ultra-short hitter, he falls into the category as a better iron player and wedge player, so he may need to be paired with a longer hitter that isn't as accurate. A guy like Koepka comes to mind.