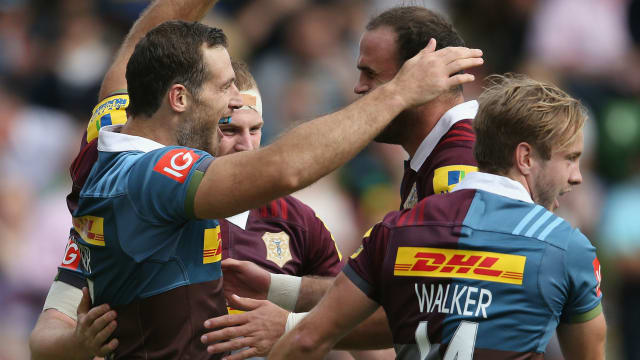 Reigning Premiership champions Saracens were punished for a sluggish start as they suffered a first defeat of the season at Harlequins on Saturday.

Mark McCall's side, who completed an outstanding domestic and European double last term, found themselves 17 points down after just 20 minutes at Twickenham Stoop - tries from Tim Visser and Charlie Walker putting the hosts in control.

Richard Wigglesworth replied for Saracens early in the second half and the scrum-half's replacement, Ben Spencer, added a late penalty, but the Quins held on to triumph 17-10.

The only downside for the hosts came in the form of an injury to Joe Marler. The England prop was forced off in the opening seconds after seemingly being knocked out attempting a tackle.

Unlike Saracens, Wasps were able to record a fourth win from as many matches as they survived a dramatic finale to beat Northampton Saints 20-15.

After Nathan Hughes had been sin-binned with seven minutes remaining, Northampton reduced an eight-point deficit to one courtesy of a converted Tom Kessell try.

However, Wasps then claimed a breakaway score through Josh Bassett - Jimmy Gopperth converting to take his personal haul of points to 15 - and the Saints were left with too much to do despite Stephen Myler's late penalty.