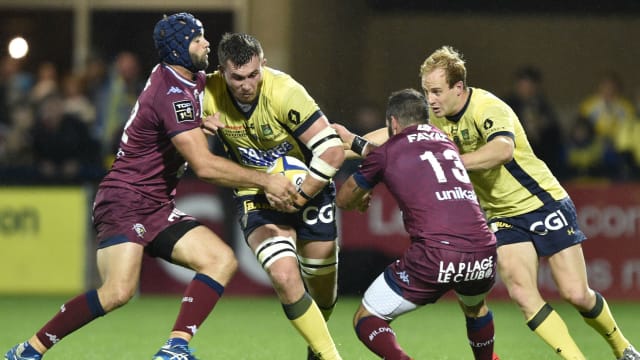 Clermont Auvergne took advantage of La Rochelle's first defeat of the season to move to the summit of the Top 14 table after five matches.

Morgan Parra's boot gave Clermont the early advantage over Bordeaux, but they turned on the style after the break with four tries to complete a 40-16 win.

They move to the top after La Rochelle's impressive start to the campaign came to an abrupt halt against Brive, the former leaders falling to an agonising 29-28 defeat.

Yellow cards for Mohamed Boughanmi and Mike Corbel proved costly for La Rochelle as each time they were reduced to 14, Brive pounced.

After falling 10-0 behind tries from Steeve Barry, Kini Murimurivalu and Vincent Rattez helped put the Rochelais 12 points ahead at the break.

However, they collapsed after the restart as Gaetan Germain kicked 14 points to secure the narrowest of victories for the hosts.

They move level on points with Montpellier after the latter cruised past Bayonne 21-9, Demetri Catrakilis kicking all but three of his side's points at the Jean Dauger Stadium.

Toulouse have now lost three in a row after starting the season with back-to-back victories, their latest reverse coming in Lyon as the newly promoted side held on in the second half.

Thanks to the cultured boot of Frederic Michalak, Lyon led 19-3 at the break and the experienced fly-half added another six after the break to deny a rampant Toulouse the win.