Klopp hails Conte as 'the Guardiola of Turin' 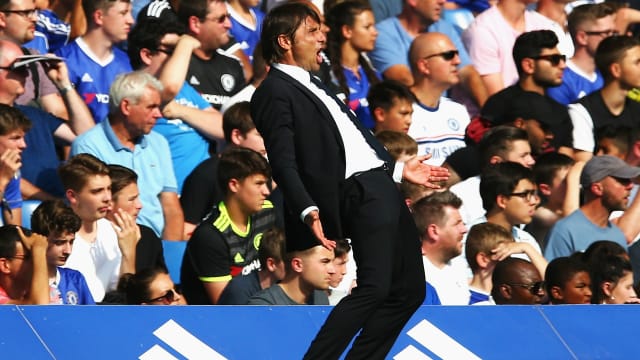 Liverpool boss Jurgen Klopp has hailed Antonio Conte as Turin's very own Pep Guardiola ahead of his side's meeting with Chelsea on Friday.

Conte secured three consecutive Serie A titles with Juventus as a coach from 2011 to 2014, having won five Scudetti and the Champions League among a number of trophies as a player with the club.

The former Juve captain has set about moulding Chelsea back into title challengers following their dismal performance last season, and has already claimed three wins and a draw from his first four Premier League matches in charge.

And Klopp has praised both the passion and the tactical nous of his opposite number ahead of their showdown at Stamford Bridge.

"I don't know why Antonio does it. He looks quite emotional, even when they don't score," he said of Conte's exuberance on the touchline.

"I watched the game [against Swansea City] - whoever was the broadcaster, they showed when they missed the goal. He's involved in the game.

"That's not the important thing, he's a successful manager. He was the Pep Guardiola of Turin. He created a special style of play. He was very successful there and with the [Italian] national team. Quite impressive, but I don't play against Antonio Conte."

Liverpool won 3-1 in the same fixture last season to give Klopp his first league win since replacing Brendan Rodgers as manager, but the 49-year-old does not expect a repeat of what proved to be a straightforward victory.

"I saw the whole 90 minutes of the last game against Swansea and they could have won that game," he said. "They're in a good moment, strong, competitive, it's how it is with teams like this: the champion of two years ago.

"Last season was not a Chelsea season. Now they are back on track. We need to be ready for a real challenge. They defend well, attack strong. It's not an easy job, but we feel confident we could do something there."

Klopp revealed that Dejan Lovren is fit to feature but suggested that Emre Can is not quite ready, despite having recovered from an ankle problem.

"The players who were not involved in the last game are available again, plus Dejan, but not the others," he added. "Emre is not injured any more, but he needs to train. He had a difficult pre-season that came later than the other players.

"It was not the best moment, but he's a wonderful player, now he needs to get fit. We do the same with Mama [Sakho] and Joe Gomez."