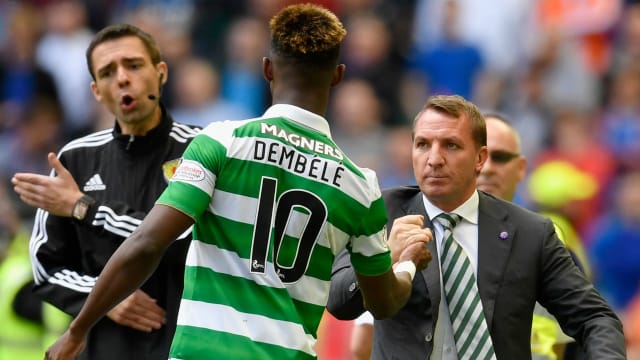 Brendan Rodgers lauded the performance of Moussa Dembele after the striker netted a hat-trick and set-up another as Celtic eased to a 5-1 Old Firm derby victory over Rangers.

The former Fulham youngster, who started in the absence of the injured Leigh Griffiths, opened the scoring in the 33rd minute at Celtic Park on Saturday and added another before the break.

After Joe Garner pulled one back for Rangers, Dembele supplied an assist for Scott Sinclair and snatched his third of the game with seven minutes remaining, before Stuart Armstrong rounded off the scoring in second-half stoppage time.

Rodgers was quick to praise the Frenchman, but affirmed the victory was down to a fantastic team display.

"Today was all about the team," Rodgers told Sky Sports. "Moussa Dembele is a top talent. I'm delighted for him.

"We're very lucky to have him here, and he's been clear that he wanted to come to a club - a winning club - that can develop him.

"He's always scored since he's been here, whether from the bench or starting games, and his performance was outstanding.

"He scored three wonderful goals, three different types of goals - shows his power from the corner, speed on the counter-attack and then his finish off his left foot was wonderful.

"He has come here and his attitude has been refreshing. Good kid and a lovely boy to work with."