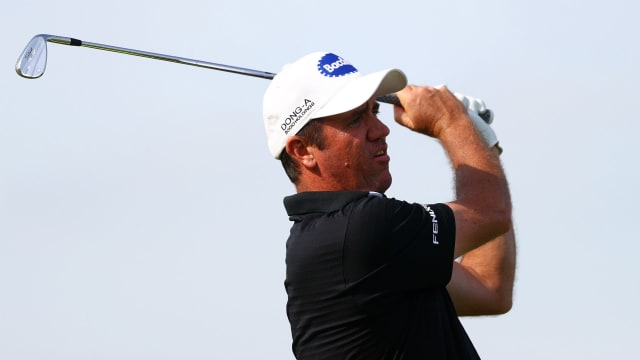 Scott Hend made great strides on moving day at the KLM Open to ensure he will start the final round at the top of the leaderboard for the second successive weekend.

The Australian carded a sparkling seven-under third round of 64 in Spijk on Saturday to take a one-shot advantage into the final round.

Two-time European Tour winner Hend led by a single stroke heading into the last round of the European Masters last Sunday, but had to settle for second place.

Hend has a golden opportunity to make up for that disappointment in the Netherlands after reacting to his only bogey of the day at the second by making six birdies and an eagle at 15 to surge to 14 under.

Nino Bertasio held a two-shot advantage when he teed off the 18th, but a double-bogey seven undid such good work from the Italian as he carded a 67 after coming up with an eagle at the sixth and four further gains.

Home favourite Joost Luiten is one of four players three strokes adrift of Hend after he slipped from second with a 69.

English trio David Horsey, Richard Bland and Ben Evans are also on 11 under, while Brandon Stone recorded a best round of the week of 63 to move to 10 under along with overnight leader Bernd Wiesberger, Tommy Fleetwood and Simon Khan.