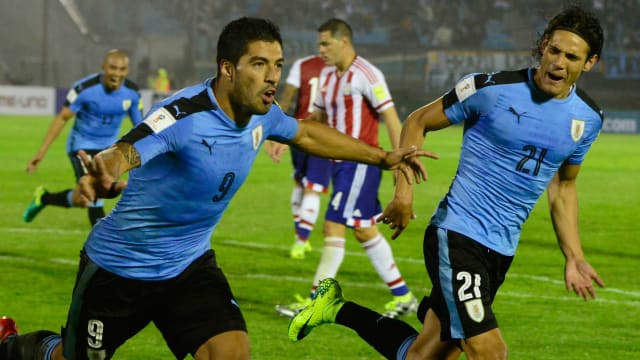 Edinson Cavani was thrilled as Uruguay secured a "crucial" victory over Paraguay in World Cup qualifying on Tuesday.

Cavani found the net twice - both assisted by Luis Suarez - as Uruguay ran out 4-0 winners at the Estadio Centenario in Montevideo.

The win moved them back to the summit of the CONMEBOL qualifying standings, leading by one point over Argentina and Brazil.

Cavani was full of praise for his Uruguay team-mates as they responded from their 1-0 loss to Argentina last Thursday.

"This was a crucial win for us. We are very pleased and very happy," the Paris Saint-Germain forward said.

"Sometimes you win without playing well, but today we showed the rebellion we felt after the difficult moment of losing to Argentina.

"But like I said the other day, we are all friends, we are family, and we are united in adversity."

Cavani opened the scoring in the 18th minute after slotting home a Suarez cross, before the Barcelona star also set him up for his second - and Uruguay's fourth - early in the second half.

"When we started the game you saw how we were and we knew it was not going to be easy against Paraguay," Cavani continued.

"But Uruguay dominated the whole game, and we were concentrated for the entire match.

"To be first in the standings is a reward for us, as we are used to looking at it from the other side.

"It is a reward for the sacrifice and great love we have for this shirt."