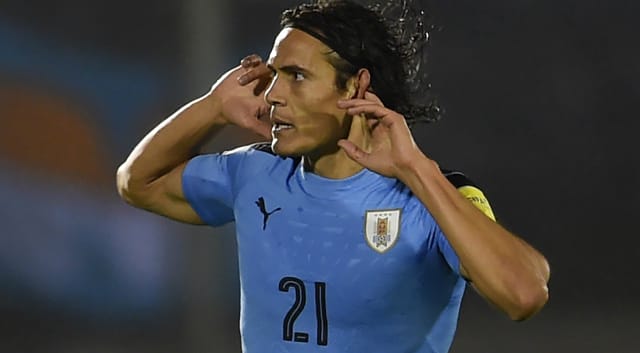 Luis Suarez and Edinson Cavani were in dominant form as Uruguay sealed a 4-0 win over Paraguay in their World Cup qualifier on Tuesday.

Suarez scored one and set up both of Cavani's goals as Uruguay kept up their 100 per cent home record in the CONMEBOL qualifiers.

Despite the wet and windy conditions inside the Estadio Centenario, Uruguay were able to adapt best as they opened the scoring early.

Suarez played in Cavani to make it 1-0 in the 18th minute, before two quick-fire goals on the stroke of half-time - one from Cristian Rodriguez and a penalty from Suarez - extended the lead.

Another piece of magic from Suarez set up Cavani for the side's fourth early in the second half, with the two substituted late on as the goals dried up.

The opening stages of the fixture saw both sides attempt to get a feel for the windy and slippery conditions in Montevideo, with neither pushing too far up the field.

In fact, the first real chance of the game was the opener, with Cavani starting the move by playing in Suarez down the right-hand side.

Suarez fended off a mistimed tackle from Paulo da Silva before playing in a teasing cross for Cavani, with the Paris Saint-Germain star producing a neat finish to open the scoring.

Paraguay failed to mount any meaningful attacks in response, with both Victor Ayala and Dario Lezcano trying their luck from outside the area, with only the latter's reaching the arms of Uruguay goalkeeper Fernando Muslera.

Their missed chances came back to cost them, with a five-minute spell from Uruguay doing lasting damage on the visitors.

Suarez won a corner taken by Gaston Ramirez - who had just had a free-kick sail wide - with his set-piece finding the head of Rodriguez, who doubled Uruguay's advantage in the 42nd minute.

The Paraguayan defence were struggling to deal with the trickery of Suarez, who won a penalty on the stroke of half-time following some neat foot work and a poor challenge from Pablo Aguilar.

Suarez stood up and converted the spot-kick, with the Barcelona star sending Uruguay 3-0 up into the break and extending his lead atop the nation's all-time scoring charts with his 46th international goal.

The second half continued just as the first ended, with Suarez terrorising the Paraguay defence.

Just like the first goal, Suarez was able to pick out Cavani, this time his header putting Uruguay 4-0 up in the 54th minute.

With the side cruising in the closing stages, Uruguay coach Oscar Tabarez elected to replace the pair with Cristhian Stuani and Abel Hernandez.

However, Uruguay were unable to find a fifth, with Paraguay ending the game with barely a whimper.