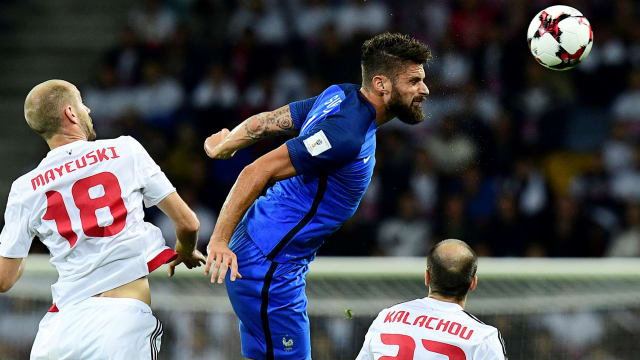 France made a stuttering start to their 2018 World Cup qualifying campaign as they were held to a 0-0 draw by Belarus in Borisov.

Olivier Giroud, Antoine Griezmann and Raphael Varane all went close to finding the net for Didier Deschamps' men, who were widely expected to make short work of a side sitting 63 places below them in the FIFA rankings.

But they were ultimately unable to secure what would have been their 16th win in the last 19 games as they failed to unlock a dogged home defence.

France's starting side contained only five of the team that began the Euro 2016 final against Portugal and although they did apply some concerted late pressure, they struggled to recapture the fluency that they showed at times during the tournament on home soil.

While rarely troubling the French defence, Aleksandr Khatskevich's men produced a battling display, having been written off by many as makeweights in a tough group also containing Bulgaria, Netherlands and Sweden.

The clean sheet was their seventh in the last nine games and the result means they have now lost only once in nine.

During a hard-fought but largely uneventful first half, Belarus were content to concede possession and sit deep, successfully keeping France at arm's length.

The hosts' goalkeeper Andrey Gorbunov was untroubled by tame, long-range efforts from Griezmann and Paul Pogba, while Anthony Martial dragged his low shot wide after beating two defenders on the edge of the box.

And it was the hosts who came closest to breaking the deadlock during the opening period as Nikolai Signevich just failed to get a meaningful touch on Timofei Kalachev's superb cross from the right.

France did manage to respond by creating a decent chance of their own on 35 minutes, but Giroud completely miscued his attempted volley, having been picked out by a raking long ball from skipper Varane.

Roared on by a vociferous home crowd, Belarus enjoyed their first period of sustained pressure at the start of the second half but were almost downed by a sucker-punch on 53 minutes.

Griezmann's clever backheel put Giroud through on goal only for the Arsenal man to again fluff his lines as he pulled his shot across the face of Gorbunov's goal and wide of the post.

Moments later, Gorbunov was called into action to parry a well-struck Griezmann free-kick over the bar and from the resulting corner, Varane rattled the crossbar with a header.

Gorbunov denied Griezmann again on 68 minutes, this time from almost point-blank range and Varane then also went close, heading a corner from substitute Dimitri Payet wide of the post.

France continued to lay siege to the hosts' goal right to the final whistle, but Khatskevich's men hung on to claim an impressive and morale-boosting point.