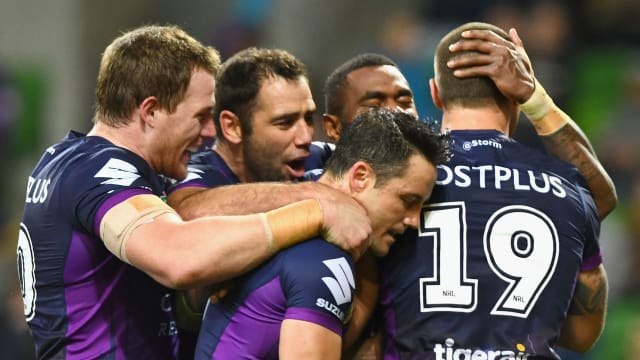 In a showdown between league leaders Storm and second-placed Sharks in the final round of the regular season, the hosts proved too strong at AAMI Park, overpowering Shane Flanagan's side, whose wait for a first minor premiership of the 21st century continues.

Sharks had drawn first blood through a James Maloney penalty, but the hosts hit back in determined fashion, skipper Cameron Smith sending over two penalties and converting Cheyse Blair's 20th-minute try, the centre found as the spare man wide on the left and crossing following an angled run.

Smith added the extras again two minutes into the second half, after Blair forced his way over, Ben Barba unable to halt the powerful 24-year-old from claiming his second try.

Suliasi Vunivalu increased Storm's comfort with a third major score just before the hour mark, gathering a loose ball out wide to claim the 22nd try of his superb debut season.

Gerard Beale pulled one back for Sharks on 69 minutes, but Jesse Bromwich delivered the killer blow when he barged over with three minutes to go, Smith sending over the two-pointer to spark celebrations in the rain in Melbourne.

Elsewhere, North Queensland Cowboys boosted their chances of retaining the premiership by sealing a top-four finish courtesy of a 32-16 win over Gold Coast Titans, who must wait for the match between Wests Tigers and Canberra Raiders on Sunday to learn if they will sneak into the finals in eighth place.

Earlier, Gareth Widdop broke the hearts of Newcastle Knights and their retiring captain Jeremy Smith by sealing a 28-26 victory for St George Illawarra Dragons with an 80th-minute penalty goal at WIN Jubilee Oval.

Trent Hodkinson looked to have sent the game into golden point when he converted Mitchell Barnett's try for the Knights in the 73rd minute.

But Smith was denied the chance to secure a winning end to his career by a contentious decision, referee Henry Perenara penalising the outgoing skipper and allowing Widdop to snatch the victory for the Dragons, who will not feature in the finals.

Knights will take an 18-match losing run into the new season, the worst from a top-tier side since the sorry Gold Coast Seagulls in 1993.