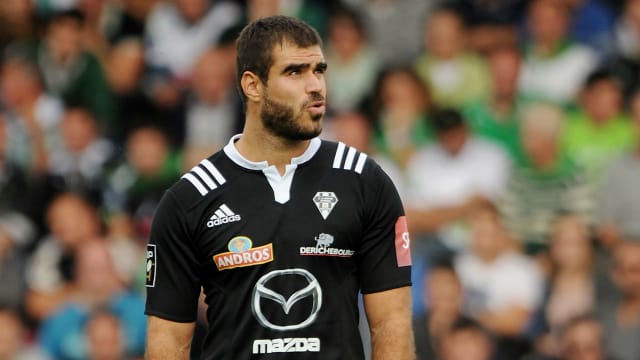 Brive moved to the summit of the Top 14 table as Gaetan Germain won the battle of the kickers to seal a 25-21 success over Toulon.

Toulon, last season's beaten finalists, slipped to their second defeat in only the third round of matches as Germain showed great composure with the boot.

His battle with Leigh Halfpenny saw kicks exchanged throughout the 80 minutes, but it was a 30th-minute penalty try for Brive that proved decisive as they clung on to maintain their unbeaten start.

La Rochelle continued to live up to their 'surprise package' tag as they moved level on points with Brive after a 26-18 victory over Castres.

After their impressive win over Grenoble last time out La Rochelle maintained their unbeaten start thanks to the boot of Zack Holmes, the centre kicking 16 points.

Holmes kept his cool to keep the scoreboard ticking over, with tries from Paul Jordaan and Steeve Barry giving them the cushion they needed to take all four points.

Clermont Auvergne are also unbeaten after three matches but for the second time this season they had to settle for a share of the points against Stade Francais.

Having been 20-16 down at the break, Clermont mounted a stirring comeback to lead 30-23 with a minute to play.

However, they were denied victory as Waisea Nayacalevu crossed for Stade Francais and Jules Plisson slotted the conversion to make it 30-30.

Newly promoted Lyon enjoyed their first success of the 2016-17 season thanks to a solid second-half showing against Grenoble, the hosts scoring 15 unanswered points as they secured a bonus-point victory.

Fellow new boys Bayonne did not fare so well, though, as they were convincingly beaten 25-9 by Pau.

After a promising start Bayonne's day became an uphill struggle when prop Jerome Schuster was shown a red card after 15 minutes for a dangerous clear-out. With a man advantage Pau cruised home, Colin Slade adding 10 with the boot.