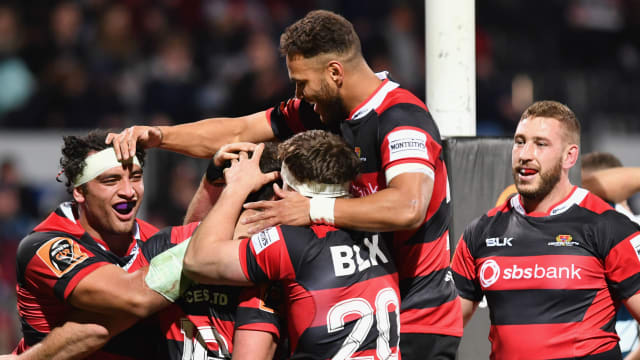 After bagging a try right from kick-off, the visitors crossed four times in the first half alone to open up a 32-13 lead by the break at Whangarei's Okara Park.

Marshall Suckling went over in the first minute and Johnny McNicholl followed six minutes later in a lightning start from Canterbury.

Suckling grabbed his second in the 21st minute and debutant George Bridge added another - a brilliant solo try down the left - with only a Joshua Goodhue try and the boot of Daniel Hawkins keeping the hosts in touch.

But Canterbury kept pace well to preserve their lead, Matt Todd and substitute Jordie Barrett, the younger brother of All Blacks star Beauden Barrett, touching down to make sure of a big win for the away team.

The visitors survived losing Lee-Roy Atalifo to the sin bin in the 73rd minute for shoulder-charging and then punching Sililoto.

Elsewhere, a second-half revival saw Tasman come from behind to defeat Taranaki 25-20.

The visitors had led 13-6 at the break in Nelson, but a pair of Marty Banks penalties enabled the hosts to remain in contention at Trafalgar Park.

And the fly-half, despite carrying a hamstring injury, converted Kieron Fonotia's 56th-minute try, while adding four more penalties after the break to complete the turnaround.

In the Championship Division, Jackson Garden-Bachop became the first Wellington player to kick seven penalties in a single match, landing all of his attempts to seal a 21-17 home win over North Harbour.