Pieters' late Ryder Cup claim is Made in Denmark 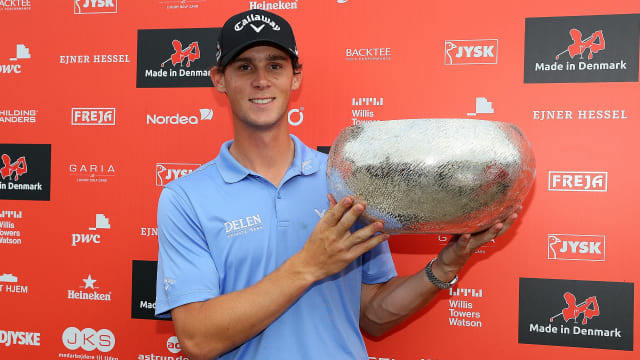 Thomas Pieters strengthened his case for a Ryder Cup place by finishing with a flourish to win the Made in Denmark by one shot on Sunday.

Darren Clarke names his three captain's picks on Thursday and Pieters sent another message to the European skipper at Himmerland Golf & Spa Resort.

The Belgian birdied the last three holes to sign for a six-under 65, finishing the week on 17 under to claim a third European Tour title on a day which included a delay of over four hours due to rain and the threat of lightning.

Pieters equalled the course record with a sublime opening round of 62 on Thursday and responded to a disappointing 71 a day later to stay in the hunt.

The towering 24-year-old rose to the occasion under pressure on the final day, making seven birdies and dropping just one shot to win by a solitary shot from Bradley Dredge.

"I really needed a good finish," said Pieters. "I saw I was one back walking to the green on 16 and I hit a great shot there but I knew I needed to make at least one more. To finish with two more birdies was pretty cool.

"It's all about winning tournaments. I'm really happy with this one. That was one of my goals, to just have one every year, just so you know you're improving and you can win. That's very important. I'm very, very happy."

Dredge held a one-shot advantage at the end of his third round, but the Welshman paid the price for a double-bogey at the second and needed a long birdie putt at the last to take second place on his own.

He might not have won, but that is some way to claim second on his own from Bradley Dredge. https://t.co/reWRMWmzYG

A gain on the 11th put Dredge back in the lead at 15 under, but he was unable to get the job done and finished just a shot ahead of Adrian Otaegui and David Lipsky.

Martin Kaymer, another contender for a Ryder Cup spot, finished in a tie for sixth on 11 under, with Soren Kjeldsen a further shot back.