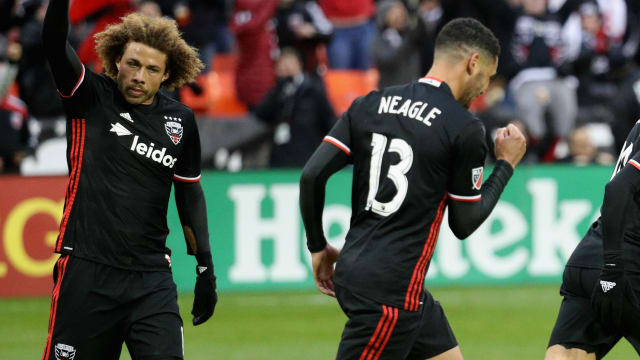 It was a goal-fest in Washington, with play-off chasing DC finishing strongly to extend their unbeaten streak to six matches.

Luciano Acosta opened the scoring in the 25th minute but the Fire equalised six minutes later via Michael de Leeuw in the American capital.

After Chicago's Khaly Thiam saw red in the 34th minute, a quick-fire brace from Mullins had DC 3-1 up with the interval fast approaching until Razvan Cocis pulled a goal back on the stroke of half-time.

And it was one-way traffic in the second half as Patrick Nyarko restored DC's two-goal advantage, Mullins completed his hat-trick and substitute Nicholas DeLeon sealed the victory.

Take a bow, @pmullins14. Nothin' like a hat trick for your new club. #DCvCHIhttps://t.co/IAOhrXvmqC

The rout helped sixth-placed DC improve to 32 points, four clear of Orlando City, though they have played a game more, while the Fire remain rooted to the foot of the table in the east.

Montreal recorded a 1-0 away win over high-flying Toronto, who were left licking their wounds.

Ignacio Piatti settled the '401 Derby' with 17 minutes remaining as the Impact snapped a 12-game winless streak in Toronto, despite Calum Mallace's red card and Didier Drogba's hamstring injury in a fiery clash.

Quickest way to silence BMO Field? Score one of these. #TORvMTLhttps://t.co/AzmMd5saNq

Toronto, who were limited to just three shots on target throughout, lost reigning MVP Sebastian Giovinco to a leg injury midway through the second half.

The loss opens the door for New York City, who are two points adrift but can leapfrog Toronto if they beat Orlando City on Sunday.

Columbus Crew were 2-0 winners at home to San Jose Earthquakes, Philadelphia Union defeated Sporting Kansas City by the same scoreline, while LA Galaxy and Vancouver Whitecaps played out a goalless draw in a match which saw Steven Gerrard hobble off injured.