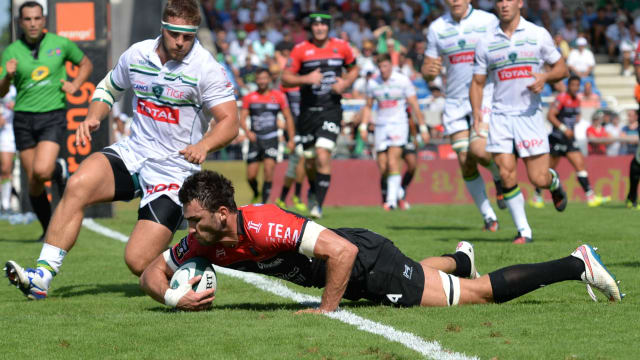 Wales full-back Leigh Halfpenny kicked 17 points as Toulon bounced back from last week's shock defeat to Bayonne by securing a hard-fought 22-18 away win over Pau.

Flanker Charles Ollivon scored the visitors' only try, while Watisoni Votu and replacement hooker Quentin Lespiaucq both crossed for Pau who at least earned the consolation of a bonus point as they suffered a second straight defeat.

Defending champions Racing 92 also recovered from an opening-day defeat as they secured a comfortable 29-16 victory against Lyon.

Toulouse maintained their 100 per cent start the season by edging out Bordeaux-Begles 22-17 at the Stade Ernest Wallon.

Julien Marchand scored the home side's only try, with full-back Jean-Marcellin Buttin replying in kind for Bordeaux who failed to match the impressive performance they produced against Racing last time out.

Following the two draws in the opening round of games, there was another stalemate at the Stade Jean Dauger between Bayonne and Castres, which finished 12-12.

Brive are another of the unbeaten sides after building on last weekend's draw with Lyon by securing a surprise 28-20 victory over Stade Francais.

Last season's top scorer Gaetan Germain was the hero for Nicolas Godignon's men, scoring 25 of his side's points courtesy of a try, a conversion and six penalties.

Grenoble, meanwhile, are still searching for their first win after being beaten at home 22-19 by La Rochelle.