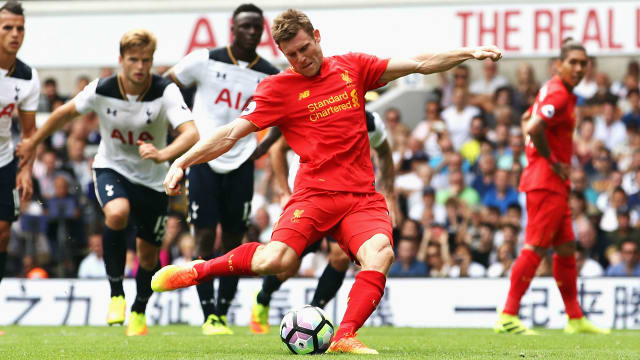 James Milner and Dejan Lovren felt Liverpool let an opportunity for three points slip away in the 1-1 Premier League draw against Tottenham at White Hart Lane.

Milner, playing once again in the unfamiliar position of left-back, opened the scoring from the penalty spot in the 43rd minute to reward a fine first-half showing from Jurgen Klopp's side.

The Reds were unable to assert themselves to the same extent after the interval as Danny Rose hit an equaliser 18 minutes from time, leaving Liverpool with four points from the opening three games of the season before their delayed return to Anfield.

"I think ultimately we're disappointed," Milner told Sky Sports. "We played well first half. Second half we didn't do enough. Probably it's a fair result.

"Once we scored the goal we didn't really get in their faces but it's a tough place to come."

Man-of-the-match Lovren said: "It's a disappointment that we didn't take the three points but it was a good performance from everyone. We had the ball a lot

"At the end it's a good point.

"If you look at our goalline chance in the first half - if we go 2-0 up it's a different game."

With Alberto Moreno appearing set to remain out of favour, Milner is happy to put his famed versatility forward for the Liverpool cause.

"You've got to learn quickly," he said of his new position. "Fortunately I have played in the Premier League long enough to have enough experience.

"I'm a Liverpool player and I'll do whatever I can for the team."

Milner added: "I have played in enough positions throughout my career, I just have to adapt to position.

"It seems a long time since we played at Anfield, it has been a tough start.

"We have four points and probably should have had more but the performances are not far off the level we need. As long as we keep performing I am sure more results will come."