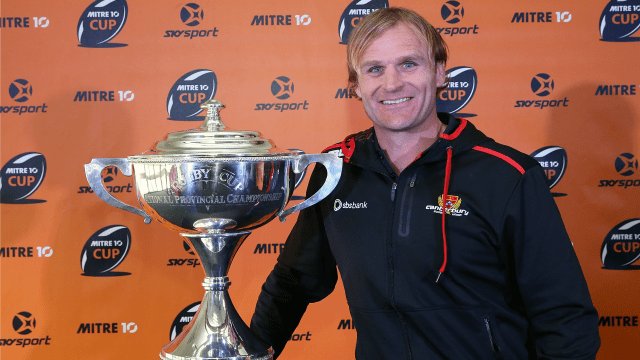 Canterbury have made some exciting additions to their squad as they seek to defend the Mitre 10 Cup in coach Scott Robertson's final season in charge of the club.

Robertson will join Crusaders at the end of the campaign but the coach is out for back-to-back titles in the provincial competition after his team beat Auckland 25-23 in last season's final.

Canterbury host a re-match with Auckland in their first match of the new season at Christchurch's AMI Stadium on Saturday and a number of new faces are likely to be on show, including Jordie Barrett, who has starred for New Zealand Under-20s and joins his older brother Scott, who plays at lock, at the club.

There are 13 new players in the Canterbury squad, with Fijians Ben Volavola, Lee Roy Atalifo and Poasa Waqanibau linking up with the team, although a number of senior stars are expected to miss the Mitre 10 Cup campaign due to being on international duty with New Zealand.

"It's the mental side of it, more than the physical, for some of the Super Rugby guys coming back in," Robertson said.

"There's a bit of excitement around having Auckland first up at home. We need to be sharp around our preparation because we basically start on Monday. You will see some new, young guys."

Auckland are likely to be the main rivals for Canterbury this season, with coach Nick White looking to go one better than last year.

Akira and Rieko Ioane are again expected to be key players for Auckland after impressing at the Olympic Games, but an All Blacks call-up for George Moala is a blow to their chances of glory.

Promoted Hawke's Bay are hoping to make an impact on the Mitre 10 Cup this season, with their experienced side boasting talent from five New Zealand Super Rugby teams, while nine young players are looking to make their debuts.

Losing semi-finalists last year, Tasman have appointed former All Blacks fullback Leon MacDonald as their new coach and will be dangerous in attack with rapid winger James Lowe.

The resumption of the partnership between Stephen Donald and Isaac Boss at Waikato will be one to watch this season, with Damian McKenzie looking to force his way back into international contention by having a big Mitre 10 Cup campaign.

Counties Manukau and Taranaki do not look likely to make much impact on the competition, with the latter side, the 2014 winners, without Waisake Naholo, Seta Tamanivalu and Beauden Barrett this season.