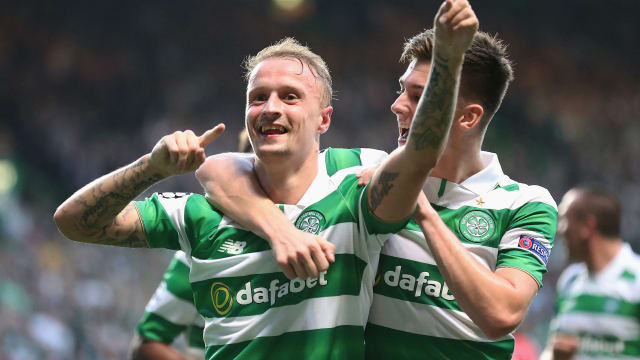 Celtic bounced back from a second-half scare to take firm control of their Champions League play-off tie against Hapoel Be'er Sheva with a 5-2 victory at Parkhead.

Brendan Rodgers' side appeared to have one foot in the group stage when a ninth-minute Tom Rogic goal and Griffiths' double were just reward for a dazzling display during the opening 45 minutes.

But, not for the first time in his career, Rodgers watched a side under his direction display defensive vulnerabilities and puncture the confidence established through slick attacking work.

Lucio Maranhao scored in the 55th minute to crown a break from a Celtic corner and Maor Melikson struck two minutes later, as seething Hapoel boss Barak Bakhar was seemingly rewarded for spending most of the half-time break alone in the away dugout.

Brown forced Goresh to tip a close-range shot wide in the third minute but it did not take long for the hosts to break the deadlock.

Fresh from a pair of goals in his opening two Celtic appearances, Scott Sinclair charged in field in pursuit of Griffiths' lofted pass. Goresh came out to meet him forcefully but the loose ball broke for Rogic to convert into an unguarded net.

Sinclair was involved when Celtic doubled their lead six minutes before half-time, continuing a move instigated by a driving run from the back by Kolo Toure.

A miserable first half for Bakhar's men concluded when Shir Tzedek saw yellow for bringing down Griffiths and the same player curled home a sumptuous free-kick from the right-hand edge of the penalty area.

Ofir Davidadze headed wide to fire a warning amid a party atmosphere early in the second half and Hapoel stunningly altered the complexion of the tie with two goals in three minutes.

First, Lucio Maranhao streamed forward as the spearhead of a swift counter-attack and slid a shot past Celtic goalkeeper Craig Gordon at his near post.

If Gordon had cause for disappointment on that occasion, there was little he could do in the 57th minute when Tony Nwakaeme picked out away captain Melikson to crash home a low strike from the edge of the box.

Rodgers responded by sending on Israel international Bitton to shore up midfield, but he also turned to forward Dembele with 20 minutes to play.

That ambition was rewarded three minutes later, with Dembele benefitting from Goresh's ill-judged attempt to claim a Griffiths corner.

Celtic still required a superb reaction save from Gordon to deny Maharan Radi before Brown, at the second attempt, thrashed in to spark delirious celebrations and take the Scottish champions to within touching distance of their first group-stage appearance since 2013.