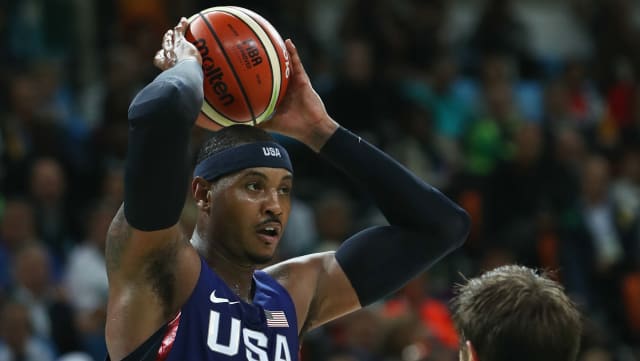 Carmelo Anthony led the United States to a 98-88 win over Australia to improve to 3-0 in Group A at the Rio Olympics on Wednesday.

The two teams entered the encounter yet to lose at the Games and finished the first quarter tied before Australia took a five-point lead into half-time.

Things remained tight in the second half, but Anthony provided a spark with 14 points in the fourth quarter to extend USA's Olympic winning streak to 20 games.

The loss would have been the Americans' first in an Olympic Games since they were beaten by Argentina in 2004.

"He [Anthony] is a great player. He's the leader on this team and we have a leader like that that's going to leave it all on the floor, no matter what possession is going on throughout the game. He just stayed resilient," Team USA team-mate Kyrie Irving said after the game.

Anthony hit nine three-pointers as he became USA's all-time leading scorer at the Games during his 14-point fourth quarter.

Irving added 19 points and five assists, coming up big in the fourth quarter as well.

"At this point I think I'm kind of used to games like this," the Cleveland Cavaliers guard said.

"I was waiting for a wake-up call and getting hit by this tough Australian team is what I needed."