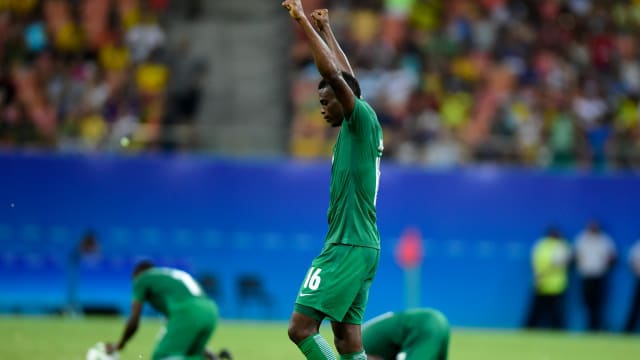 Nigeria and Portugal became the first teams to qualify for the Olympic men's football tournament quarter-finals, while hosts Brazil were held again.

The 2008 runners-up Nigeria backed up their thrilling 5-4 win over Japan with a 1-0 victory against Group B opponents Sweden, courtesy of Sadiq Umar's first-half goal.

Portugal, who defeated Argentina in their Rio 2016 opener, made it two wins from two in Group D on Sunday with a 2-1 come-from-behind triumph against Honduras.

Neymar's Brazil are still without a goal from their opening two Group A games of the tournament, held to another 0-0 draw, this time by Iraq.

Denmark boosted their chances of progression to the next round with a tense 1-0 win against South Africa, while Argentina got off the mark in Group D with a 2-1 victory over Algeria.

Germany scored late through Serge Gnabry to salvage a 3-3 draw with South Korea in Group C, and Japan battled from two goals down to secure a 2-2 draw against Group B rivals Colombia.

Meanwhile, Fiji scored their first ever Olympic goal in their Group C clash with Mexico, but despite leading at half-time went down 5-1 to the defending champions.

Wellington Phoenix forward Roy Krishna made history with Fiji's first goal at the Olympics, heading the South Pacific nation into a 10th-minute lead.

PLAYER OF THE DAY

However, Mexico struck back in the second period, with Erick Gutierrez scoring four of their five goals in a 5-1 win.

"I take the blame for every chance I could not take advantage of, but I made one and I took the pressure off myself. It was as if I was fighting against the goal," Argentina's match-winner Jonathan Calleri on his performance in front of goal.

"Thirty seconds is too early to say we went wrong in the game. What happened was a mistake, a bad pass and the Honduras' player set up a goal for the striker, in a very difficult area to mark," said Portugal coach Rui Jorge, after his side went down inside the first 30 seconds in their win against Honduras.

UP NEXT
The third and final group matches take place on Wednesday, with Brazil needing a win against Denmark to guarantee their spot in the last-eight. Argentina also need to beat Honduras if they are to make it through to the quarters, while Mexico have a tough clash against South Korea.