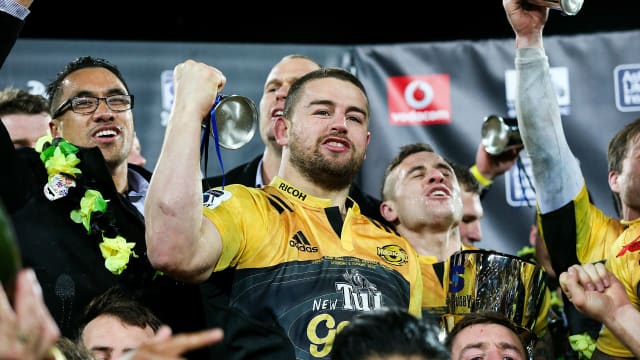 Hurricanes were beaten finalists in 2006 and 2015, but bounced back from last year's defeat to Highlanders by overpowering Lions 20-3 at Westpac Stadium on Saturday.

Beauden Barrett ran the show from fly-half, capping a virtuoso display with a converted try to secure the trophy in a feat the likes of former All Black icons Jonah Lomu, Ma'a Nonu and Conrad Smith were unable to achieve.

Coles' presence on the field was also inspirational, the hooker playing through the pain of broken ribs to feature for almost 50 minutes, and he spoke of the confidence that had coursed through the Canes side throughout the play-offs - in which time they did not concede a single try.

"I'm proud of the boys," he told Sky Sports. "The belief we showed in the last seven to eight weeks is a credit to the culture and team and I'm happy to bring a championship to the Hurricanes.

"We knew it was coming. We've been playing knockout rugby for the last eight weeks so had to keep winning and it became a habit I suppose.

"The preparation we put in this week is a credit to this franchise. There's been a lot of sorrow for this club but tonight we can finally say we're champions.

"It [this title victory] goes out to all of those Hurricanes players who have played in the past, we finally did it!"

Lions coach Johan Ackermann saw his side struggle to impose themselves in torrid wet and windy Wellington weather, but pointed to the poise that Barrett had shown in his play as crucial.

"Maybe on a dry day you could have spread the ball a little more but they put you under tremendous pressure," he said.

"It was a great arm wrestle and neither team really constructed tries as both defences were quite good.

"I think Beauden Barrett controlled the game very well and the kicking game. A lot of the game was played in the middle of the park and that shows you what a classy player he is."