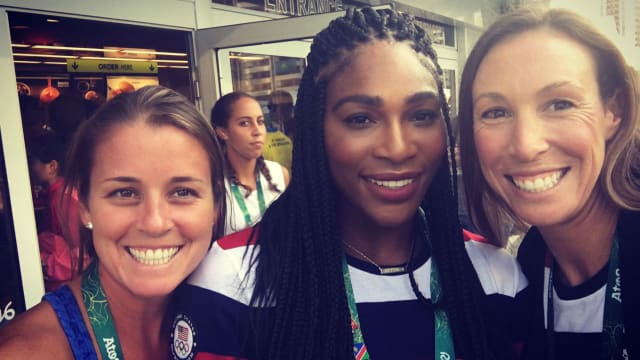 Missy Franklin won four gold medals at the London Olympics, but one of her favourite memories came at the cafeteria in the Olympic village, where she and other athletes gave Usain Bolt a spontaneous standing ovation when he walked in to get some food.

Elite athletes can be fans just like anyone else, and that was evident in the hours before Friday's opening ceremony in Rio as Olympians took to social media to gush over sightings of their celebrity peers.

United States rower Megan Kalmoe played it cool around lunchtime after spotting Olympic legend Michael Phelps from across the room.

But such restraint went out the window when Kyrie Irving, Klay Thompson, Draymond Green and other NBA stars mingled with the US swimming and rugby sevens squads.

Thanks for the pre meet talk up @KyrieIrving #GoUSA #OneTeam

Sweet of Serena to ask to take a pic with us pic.twitter.com/oR5k2NpBuT

Athletes always like to pick up tips on how the best go about their business, and that was evident in the crowd around top-ranked tennis player Novak Djokovic when the Serbian decided to have a practice session at the village.

When @DjokerNole decides to train at the #OlympicVillage he draws a crowd! #Rio2016pic.twitter.com/5fESgW3nTR