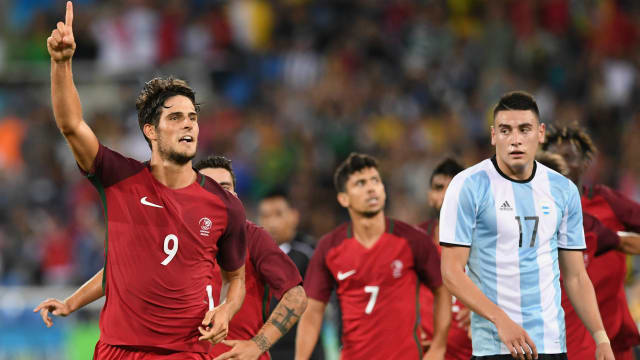 Second-half goals from Portugal guided them to a 2-0 win over Argentina in their Olympic football tournament opener, while South Korea put in an impressive shift against a hapless Fiji.

Portugal, spurred on by the senior national team's success at Euro 2016, found the net through Goncalo Paciencia and Pite - both assisted by Bruno Fernandes.

South Korea were in dominant form against Fiji, scoring seven second-half goals in an 8-0 rout of Frank Farina's men.

Hosts Brazil were held to a 0-0 draw by a 10-man South Africa, while defending champions Mexico were pegged back twice in a 2-2 draw with Germany.

Iraq and Denmark played out a scoreless draw, Colombia fought back to secure a 2-2 draw with Sweden, and Honduras survived a nervy finish to defeat Algeria 3-2.

Meanwhile, Nigeria overcame difficult preparations for the tournament by holding on for a 5-4 win over Japan in a nine-goal thriller.

South Korea were only 1-0 up with 30 minutes to play, before three goals in 90 seconds - including two from Kwon Chang-hoon - opened the floodgates in Salvador, Bahia. The AFC representatives went on to score another four in the biggest win at the Olympics since 1980.


PLAYER OF THE DAY

Ryu Seung-woo may have scored a hat-trick against Fiji, but Nigeria forward Oghenekaro Etebo went one better and scored four in the side's win over Japan. The 20-year-old, who plays club football for Feirense in Portugal, scored two in each half in the 5-4 win.

"It is really important as our generation is trying to be better. If we can win like the national team [did at the European Championship] then the name of Portugal will be at a higher level," said Paciencia, when asked if Portugal can go in to win gold.

"I had never missed a goal like this. I am angry, even shame, but it happens. I'm disappointed in myself, I will not be able to sleep well today," said Brazil's Gabriel Jesus, after hitting the post with an open goal to aim at.

The action resumes on Sunday with Germany up against South Korea, while Argentina will look to get on the board against Algeria and hosts Brazil face Iraq.