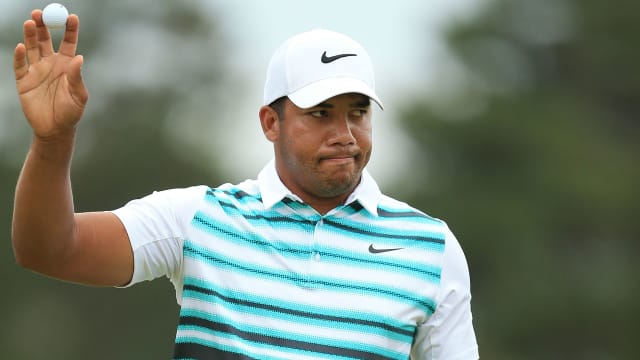 Jhonattan Vegas ended his PGA Tour drought after blitzing the field to win the RBC Canadian Open by one stroke on Sunday.

Without a Tour victory since 2011, Vegas birdied his final three holes for an eight-under-par 64 to finish ahead of U.S. Open champion and world number two Dustin Johnson at 12 under in Oakville, Ontario.

The Venezuelan Vegas was almost flawless at the Glen Abbey Golf Club, kicking off his round with a flurry of five successive birdies starting at the second hole, after opening the day five shots adrift of overnight leader Brandt Snedeker.

Vegas bogeyed the eighth hole, but that was the only blemish on an otherwise stellar day, the 31-year-old going on to birdie the 13th, 16th, 17th and 18th as he climbed 14 spots up the leaderboard to secure a spot at next week's US PGA Championship.

"It;s a fun feeling," Vegas said on CBS after his round. "This is what we train for and this is what we spend every moment preparing for.

"From where I started this year, not having full status, to winning and everything that comes with it... I just have to thank God for it."

Johnson made a late charge with an eagle at 16 and birdie at 18, but his final-round 69 was not enough.

"It's incredible ... There's just a ton of emotions running through my head right now."

The in-form American finished tied for second at 11 under alongside rookie Jon Rahm (67) and Martin Laird (67).

Australian Geoff Ogilvy, who finished in a tie for ninth alongside Canadian amateur Jared du Toit (71), Ben Crane (67) and Matt Kuchar (69) at nine under, shot a stunning nine-under 63, after posting two eagles from his last three holes.