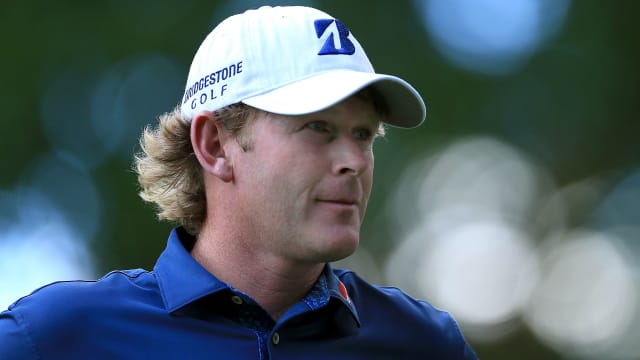 Brandt Snedeker finished the third round with an eagle as he claimed a one-stroke lead at the RBC Canadian Open on Saturday.

Snedeker carded a six-under-par 66 to hit the front ahead of U.S. Open champion Dustin Johnson and Canadian amateur Jared du Toit through 54 holes in Oakville, Ontario.

An eight-time PGA Tour victor, Snedeker was flawless on the front nine, reeling off five successive birdies starting from the second hole at the Glen Abbey Golf Course.

The back nine was not as straightforward for Snedeker, who bogeyed twice, though he did pick up a shot at the 16th before closing out the day with an eagle to be clear at nine under overall.

This eagle on No. 18 today has given Brandt Snedeker the clubhouse lead at the #RBCCOhttps://t.co/m7tpO7rODY

A second consecutive round of 71 saw in-form Johnson surrender his overnight lead in Canada.

Johnson experienced a mixed day, with four birdies and three bogeys, but a birdie at the 18th helped him stay within a stroke of Snedeker.

Du Toit (70) is also eight under heading into the final round as history beckons for the local hopeful.

The Canadian finishes with eagle and enters the clubhouse in 2nd place. https://t.co/owxsKPcLx4

A bogey-free back nine, highlighted by a birdie and a final-hole 40-foot eagle putt, has the 21-year-old on track to become the first amateur to win on Tour since Phil Mickelson in 1991.

A stroke further back is Steve Wheatcroft (64), alongside Alex Cejka (69).

World number one and defending champion Jason Day posted a third-round 69 to be seven shots off the pace.

After a day to forget on Friday, the Australian star was back in the swing of things with an eagle, three birdies and two bogeys.

Day is two under for the tournament alongside Luke List, who went from top of the leaderboard to a share of 28th position following his five-over-par 77.