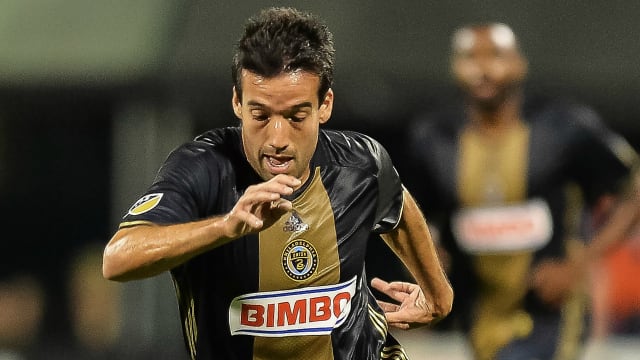 The Philadelphia Union closed the gap on New York City at the top of the MLS Eastern Conference standings with a thorough 3-0 win over DC United on Saturday.

Ilsinho opened his MLS account as he struck twice to lead the way for Union, as Roland Alberg and then the Brazilian converted penalties in the first half, before the latter notched his brace with a goal in the 47th minute to seal the win.

Kofi Opare was sent off for United in the second half as Philadelphia moved within a point of New York City.

Robbie Keane got on the scoresheet as he helped the LA Galaxy to a 1-0 win over the bottom-placed Seattle Sounders in the Western Conference.

Gyasi Zardes broke down the left wing but put his cross a touch behind the onrushing Keane, who did superbly to contort his body into a position to score via the crossbar.

Just Robbie Keane doing what he does best. https://t.co/Im5FTMGTOW#SEAvLApic.twitter.com/8t1JDhnCaf

It was similarly tight for Toronto FC as they beat the Chicago Fire 1-0.

Sebastian Giovinco's nightmare run in front of goal continued as he missed a number of opportunities, but he did lay on the assist for Justin Morrow, who scored what proved the winner after just nine minutes.

The result moves Giovinco and Co. to fifth in the eastern standings.

The New England Revolution were too strong for the Columbus Crew, winning 3-1 as Lee Nguyen and Kei Kamara scored either side of a Will Trapp own goal and a goal at the right end for Ola Kamara.

Meanwhile, the Colorado Rapids looked as though they could not survive 20 minutes with 10 men after Eric Miller was shown a red card, with team-mate Kevin Doyle having cancelled out Kendall Waston's opener for the Vancouver Whitecaps in a 2-2 draw.

The Rapids did well to hold out with 10 men, but Cristian Techera drew a foul in the penalty area before converting the spot-kick which looked set to seal the win until Axel Sjoberg stole a point from Vancouver.