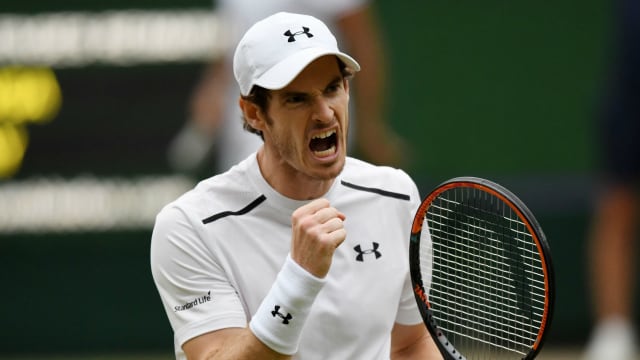 Andy Murray claims Amelie Mauresmo helped to add variety to his game as he nears a third Wimbledon final with Ivan Lendl back in his coaching box.

Murray won the 2012 US Open and Wimbledon a year later, his only two grand slam triumphs to date, under the Czech's guidance.

Their professional relationship ended in March 2014, Murray hiring Mauresmo in June that year.

The decision to employ the Frenchwoman, a former world number one and two-time grand slam winner, attracted plenty of scrutiny.

Murray reached two slam finals, losing to Novak Djokovic twice at the 2015 and 2016 Australian Opens, during their time together, before splitting in May.

A heavier forehand was a feature of the Brit's success under Lendl and, with the 56-year-old back in his corner, that was on show again as he defeated Jo-Wilfried Tsonga in five sets on Wednesday to reach the last four at the All England Club, where he will face Tomas Berdych on Friday.

World number two Murray acknowledged eight-time grand slam winner Lendl helped to make him proactive, but also credited Mauresmo with encouraging him to play "more intelligent tennis", the 29-year-old reaching the French Open final for the first time in his career this year, just weeks after their partnership came to an end.

"When I started working with Ivan Lendl the first time, I definitely tried to play more aggressively, whether that meant hitting the ball harder or standing inside the baseline," he wrote in a blog on the BBC website.

"It didn't stop when Ivan left, though. I was still trying to play positive tennis when I started working with Amelie Mauresmo, but also to add new dimensions to my game.

"I've had better results on clay over the last couple of years and that isn't because I was hitting the ball harder, it's because I was playing smarter and more intelligent tennis."

Murray has defeated Berdych in their last four meetings, including at the semi-finals of the 2015 Australian Open.

And he believes it will be necessary to keep the 30-year-old guessing if he is to prevent him from reaching a second Wimbledon final.

"Playing with the kind of variety I talked about doesn't work against everyone, but against Tomas Berdych it has worked well over the last couple of years," he said.

"He hits a big ball and likes to dictate, so I need to make sure I keep him on the back foot as much as possible in Friday's semi-final."

Berdych lost the 2010 final to eventual winner Rafael Nadal, who accounted for Murray in the semi-finals but is absent from this year's tournament due to injury.