Kyrgios should consider future if he doesn't love tennis - Philippoussis 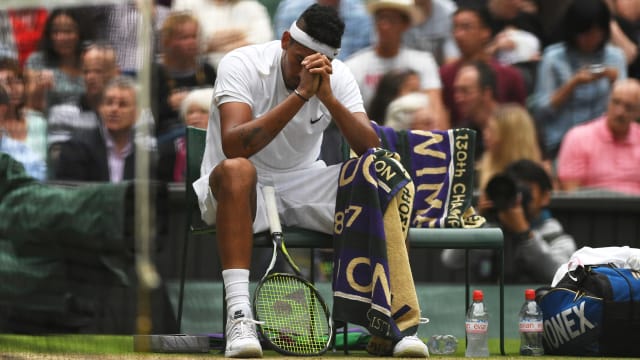 Nick Kyrgios should question his playing future if he cannot love tennis, according to Mark Philippoussis.

Kyrgios, 21, has come under fire following his straight-sets loss to Andy Murray in the Wimbledon fourth round on Monday.

The world number 18's preparation and support setup have been questioned, with many insisting he is failing to live up to his talent.

Kyrgios has repeatedly said he does not love the sport and Philippoussis, a two-time runner-up at grand slams, offered his advice.

"There's certain things that eat at me and then the fact that he doesn't love the game," Kyrgios' fellow Australian told the Wimbledon website.

"I'm not quite sure if I believe that to be quite honest with you, I believe that for him to have played the matches he has and to be as good he is, you have to love the sport."

Asked if it was possible to learn to love tennis, Philippoussis said: "No. Then stop playing. Why continue?

"Who cares if you've got raw talent, if nothing's going to happen? It's raw talent. He should be competing for grand slams.

"I'm being brutally honest because I'm a supporter. This is coming from a good place.

"I'm not ripping into the guy because I love the kid. This is coming from a good place. I would tell him this to his face."

Kyrgios is a two-time grand-slam quarter-finalist, reaching the last eight at Wimbledon in 2014 and the 2015 Australian Open.