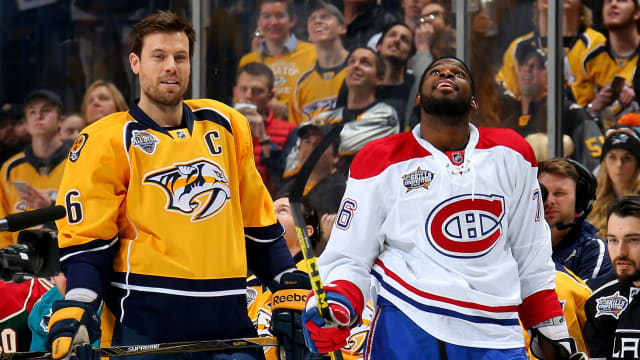 On what proved a busy day in the NHL, it was the Montreal Canadiens and the Nashville Predators that stole the show, with a blockbuster trade that saw defencemen P.K. Subban and Shea Weber trade places.

Subban - drafted to the Canadiens in 2007 and considered one the most exciting players in the league - moved to Nashville with Weber - drafted in the second round of the 2003 entry draft to the Predators - heading in the opposite direction.

Canadiens general manager Marc Bergevin confirmed the shock deal on Wednesday with a release that indicated the trade was about securing better leadership for the team's defence after a mixed 2015-16 season, which saw Montreal finish sixth in the Atlantic Division.

"We completed today an important transaction which I am convinced will make the Canadiens a better team," Bergevin said.

"It was also one of the most difficult decisions I had to make as general manager of the Montreal Canadiens. In Shea Weber, we get a top-rated NHL defenseman with tremendous leadership, and a player who will improve our defensive group as well as our power play for many years to come.

"Shea Weber led all NHL defensemen last season with 14 power play goals. He is a complete rearguard with impressive size and a powerful shot.

"P.K. Subban is a special and very talented player. He provided the Canadiens organisation with strong performances on the ice and generous commitment in the community. I wish him the best of luck with the Predators."

Weber, 31 before the start of the new season, is four years Subban's senior and boasts 443 points over his 763 games.

Elsewhere in the league, the New Jersey Devils made a big move of their own ahead of the start of NHL free agency, acquiring All-Star forward Taylor Hall from the Edmonton Oilers for defenseman Adam Larsson, while the Columbus Blue Jackets secured Seth Jones after he signed a six-year deal worth a reported $32.4million, stopping the 21-year-old from becoming a restricted free agent on Friday.