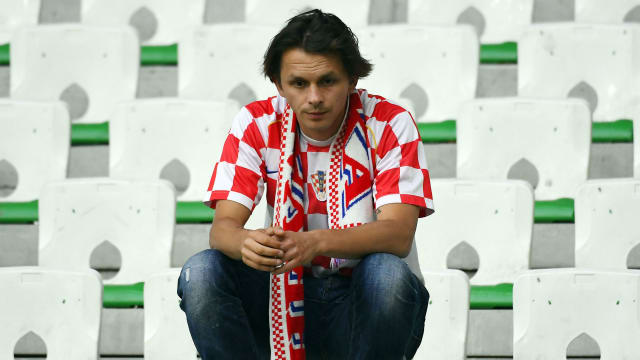 The price football will collectively pay for failing to stamp out hooliganism was clear for all to see in Saint-Etienne on Friday, where a brilliant Croatia side were denied a deserved victory by the disgraceful actions of a violent minority.

The match at Stade Geoffroy-Guichard should have served notice of Croatia's potential to challenge for the Henri Delaunay Cup, as they took a 2-0 lead against Czech Republic thanks to excellent goals from Ivan Perisic and Ivan Rakitic.

Instead the game will be remembered for the crowd trouble that marred the second half, when, their team having conceded to Milan Skoda, a number of Croatia's supporters rained flares down onto the pitch, forcing Mark Clattenburg to suspend play.

A firefighter could have been seriously injured when, as he sought to clear the objects, one exploded, sending him sprawling to the turf holding his face.

UEFA and local organisers are yet to comment on his wellbeing, although he appeared to have escaped lightly based on professional photographs taken at the stadium.

As empty seats cleared around the troublemakers, a banner was held up seemingly directed at the Croatian Football Federation (HNS), with a known minority opposed to the national governing body having reportedly planned and even forecast the demonstration in advance.

If that is the case, it raises serious questions about the level of scrutiny applied to supporters entering the venue by security staff, as well as casting doubt on the capacity of the HNS, UEFA, local organisers and police to pre-empt potential problems. The same could be said of the determined Russian hooligans who allegedly prompted the carnage engulfing Marseille in the early days of the tournament.

Croatia now face the prospect of a UEFA investigation that could result in a similar serious sanction to that imposed on Russia after the chaos in the stands at Stade Velodrome following the 1-1 draw with England: A suspended disqualification to be enforced if further issues occur.

Given the apparent determination of the dissident element among the travelling Croatian fans to cause HNS embarrassment, a repeat of the same dangerous actions against Spain in Bordeaux on Tuesday is a worryingly real possibility.

Piling further shame on the actions of a group Croatia coach Ante Cacic right labelled "sports terrorists" is the role they played in ruining what should have been cathartic victory for the squad, who played brilliantly as they sought to honour the memory of the fathers of captain Darijo Srna and goalkeeping coach Marjan Mrmic, who passed away in the week before the game.

Even should they escape sanction and avoid further sabotage from the stands, Cacic must face the reality of his team's reliance on Luka Modric, who was taken off as a precaution due to tiredness and muscle tightness just past the hour mark.

His withdrawal certainly contributed to Czech Republic gaining the ascendency and pulling one back.

And the Real Madrid star's absence after the violent interruption, while hardly the defining aspect of Croatia's collapse, left them less able to resist the late Czech charge.

Keeping Modric fit and firing will be crucial to Croatia's hopes, but priority number one for all concerned - particularly UEFA and the French police - must be to ensure no further major instances of crowd trouble ruin what is threatening to become one of the most hostile major tournaments in living memory.