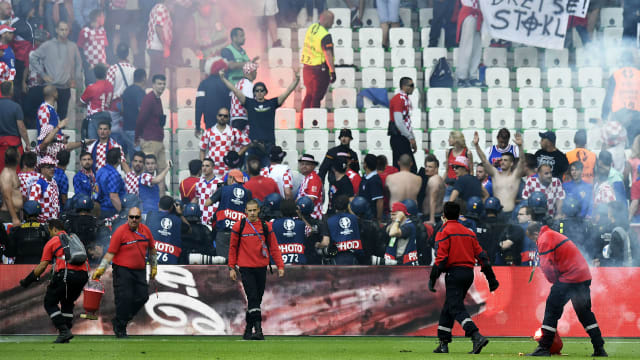 Fans who threw flares onto the pitch at Stade Geoffroy-Guichard were labelled "sports terrorists" by Croatia coach Ante Cacic on Friday.

Cacic's team were winning 2-1 against Czech Republic in Saint-Etienne, when a series of flares were thrown onto the pitch from the end containing the Croatian fans.

One member of stadium security fell and had to be helped the field after a firecracker exploded next to him while attempting to clear the playing surface.

Croatia's players pleaded with their fans to stop the disruption, which prompted an angry confrontation between the country's supporters as riot police watched on and stewards attempted to intervene.

The delay appeared to affect Cacic's players, who conceded a penalty to draw 2-2 after dominating.

The incident, which also saw a banner displayed in the stands, is believed to have been a premeditated demonstration aimed at Croatia's Football Federation [HNS].

And the national team boss issued a damning condemnation of the actions of what he described as a shameful minority.

"I hope this will never happen again in the tournament," he said.

"It was like terror. They are hooligans, not supporters. Their place is not in the stadiums.

"The same happened in Milan against Italy. Even part of the Croatian media was not happy with my comments about that. We saw some Nazi signs on the Hajduk pitch against Poland. They ruin everything we are doing. Probably they have some support from somewhere but 90 per cent of Croatian supporters are shamed in front of the whole of Europe.

"This is about six, seven individuals. I hope we can identify them and punish then, I hope the FA is doing everything to prevent it but it's impossible to avoid. These people are very scary. We knew there were threats. I am sorry. These are not real Croatian supporters. They are sports terrorists. We have so much experience with that. It hurts so much.

"[The] Croatian FA cannot fight alone against these hooligans."

UEFA has confirmed it will investigate the incident and Croatia may now face similar sanctions to Russia, who received a suspended disqualification after trouble against England at Stade Velodrome in Marseille.

Croatia, who would have secured a place in the round of 16 with a win but are at least assured of third place in Group G, will now face a difficult final match against Spain in Bordeaux on Tuesday.