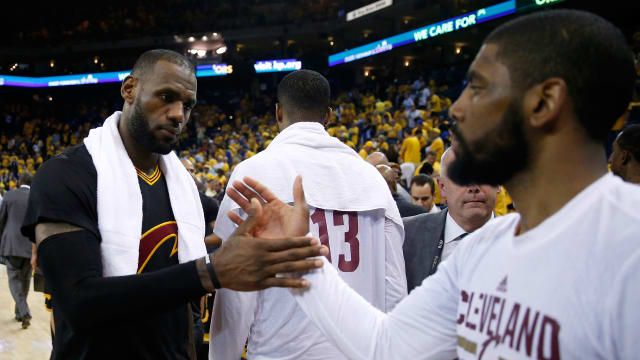 Irving scored 41 points, while James matched that total and added 16 rebounds in a 112-97 victory over the Golden State Warriors, trimming the defending champions' lead to 3-2 ahead of Thursday's game six in Cleveland.

A knee injury suffered by Golden State's Andrew Bogut in the second half compounded the absence of Draymond Green, who was suspended for game five after appearing to strike James in the groin in game four.

However, James was eager to focus on the performance of Irving.

"As one of the leaders of the team, we just went out there and executed," said James.

"We've got a guy like [Irving] who is very special - that was probably one of the greatest performances I've ever seen live.

"To put on the show that he did, to go out and follow the keys, and play winning basketball - we did that tonight."

Cavaliers head coach Tyronn Lue hailed the aggressive strategy of his team, saying: "We just wanted to be aggressive and continue to attack, like we've been talking about all series. [Irving and James] had two great games and we need those two guys to give us confidence early and they both did that.

"I'm very excited about the way we scrapped and continued to play hard and that's how we've got to play - that's us.

Lue added that the absence of Green was a decisive factor in the game, hailing the banned 26-year-old as one of the stars of the NBA.

"He's their best defender," said Lue. "I've said it all along that he is the best guy in the NBA as far as reading when to help, triple switches and kicking guys out of mismatches, knowing when to go and not to go.

"He's an underrated shot-blocker and he can go out one through five, so that definitely hurt their defense. I was proud of the way our guys played and competed."

For Irving, the attention immediately turns to game six and the chance to take the series to a decider.

"The spacing out there allowed me to get to certain spots on the floor where I could be effective," he said. "We will be very well prepared for game six.

"That's the only thing that's on our mind right now. We're not satisfied. We understand the magnitude of what game six means for us at home and we know it'll be an incredible level that they play at, but we have to play at an even better level."