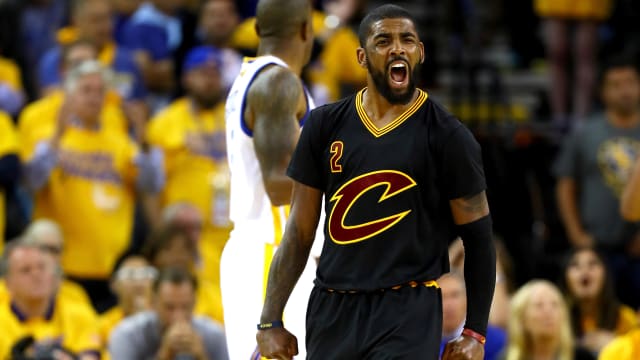 LeBron James and Kyrie Irving have kept the Cleveland Cavaliers alive in the NBA Finals against the Golden State Warriors.

James (41 points and 16 rebounds) and Irving (41 points) combined to lead the Cavs to a 112-97 victory over the Warriors at Oracle Arena in game five on Monday.

With the win, the Cavs ensured there would be a game six in Cleveland on Thursday as they pulled back to a 3-2 series deficit.

Andre Iguodala had a double-double of 15 points and 11 rebounds for the Warriors, who were without the suspended Draymond Green.

Along with James and Irving, J.R. Smith (10) was the only other Cleveland player in double-figures for points, while Tristan Thompson finished with 15 rebounds.

An entertaining first half saw the teams locked at 61-61 at half-time, but the Cavs took control of the contest after that.

They outscored the Warriors by nine points in the third quarter and six in the fourth to keep the series alive.

Golden State lost Andrew Bogut to what appeared a serious knee injury in a further blow ahead of the teams returning to Cleveland.