Curry: We wanted to close out series in front of our fans 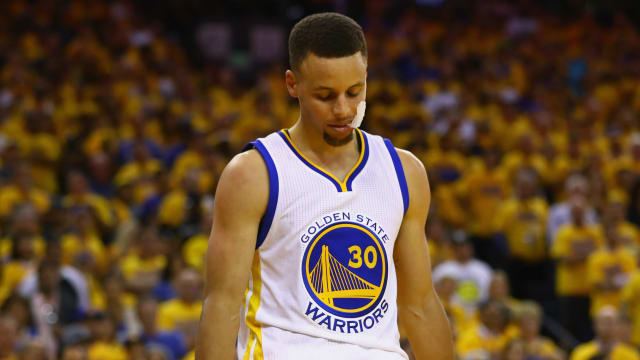 Stephen Curry said he was disappointed not to seal NBA Finals victory in front of the Golden State Warriors' fans, but hailed the match-winning performances of LeBron James and Kyrie Irving as Cleveland Cavaliers kept the series alive.

Irving piled up 41 points and James contributed 41 points and 16 rebounds as Cleveland Cavaliers won Game 5 112-97, while a knee injury to centre Andrew Bogut made it a night to forget for the Warriors.

Curry hit 25 points and nailed a combined 11 three-pointers with Klay Thompson, but it was not enough for his side, with James and Irving dominant.

"They're two talented players that are capable of big games like that," said Curry. "You don't want it to happen on you, especially in a situation like tonight.

"It sucks that it happened tonight when we had an opportunity to close out a series in front of our own fans. It's a tough feeling, but you work hard.

"We'll be ready. We'll watch the film and understand where the mishaps were, especially on the defence against those two guys, come out with confidence and get the job done."

Coach Steve Kerr accepted the Warriors were not good enough defensively, but insisted he was happy with a 3-2 lead in the series after five matches.

"They shot 53 per cent and scored 112 points so the defence was the issue for us," Kerr said. "We had a good offensive first half, made some shots, scored 61 points, then got bogged down in the second.

"We tried a lot of different things and nothing seemed to work, it was one of those nights. But give them credit, they played a great game.

"We're in the same place we were last year, up 3-2 and heading back to Cleveland. If you had told me this before the series, I would have taken it. We're in a good spot."

Thompson added that Warriors missed the suspended Draymond Green "big-time", but refused to use his absence as an excuse for the defeat.

"Draymond does a little bit of everything - obviously his playmaking, his rebounding, his communication and his heart and soul," Thompson said.

"Obviously we missed him big-time, but it's not an excuse, we had an opportunity to win the game."