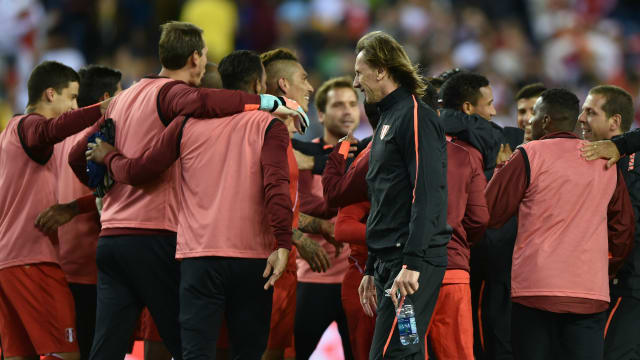 Ricardo Gareca may have conveniently missed the controversial goal that sealed his Peru side's 1-0 win over Brazil and put them into the quarter-finals at the Copa America Centenario, but he feels his side's win was deserved.

Peru were on the back foot for large portions of the Group B fixture against Brazil on Sunday, knowing only a win would see last year's semi-finalists through to the knockout rounds following Ecuador's 4-0 thrashing of Haiti.

But they got their winner through Raul Ruidiaz, who seemed to use his lower arm to turn the ball into the back of the net with 15 minutes remaining at Gillette Stadium in Foxborough.

The referee gave the goal before the furious reaction of Brazil's players prompted an extensive review with his linesman that lasted almost five minutes, before the original decision was upheld.

Gareca said he did not see the goal which sealed Peru's qualification at Brazil's expense and refused to comment on its legitimacy, but said it did not take away from his team's result.

"I couldn't see the goal so I'd rather avoid judgment to be able to review in detail," the coach told reporters after the game.

"We won deservedly, no one gave us anything regardless of how the goal is considered.

"Any incident [like the goal] is within the risks that may occur."

The Argentine coach said that detractors of Peru's tactics during the game were invalid.

"It was practical, we defended when we had to defend [and] hit at the time we had to," he said.

"Peru made a game like we had to do, given the scale of the rival" said Gareca, who appreciated having qualified from a "tough group against this important rival."

Peru will now face Colombia in the last eight of the centenary tournament in the United States.