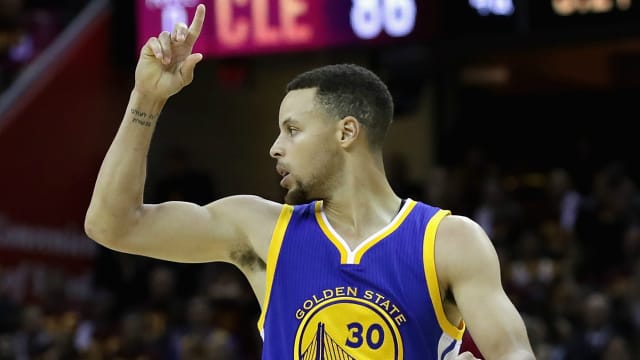 The Golden State Warriors are just one game away from back-to-back championships after taking a commanding 4-1 lead in the NBA Finals with a 108-97 victory over the Cleveland Cavaliers on Friday.

NBA MVP Stephen Curry Curry (38 points) and Klay Thompson (25) were back to their best after both had a subdued game threes - which the Cavs won by 30 points to inject some life back into the series after Golden State raced to a 3-0 lead - and led the Warriors to another impressive win in game four.

Curry went seven-of-13 beyond the arc to help the Warriors break another NBA record in scoring 17 three-pointers - the most ever in a single NBA Finals game, while he also made nine of 10 free throws as Harrison Barnes and Andre Iguodala added 14 and 10 points respectively.

Kyrie Irving top-scored for the Cavs with 34 points, while LeBron James posted a double-double (25 points, 14 rebounds) and they even had Kevin Love check in to a standing ovation with five minutes remaining in the first quarter after missing game three with concussion, but it was not enough against the rampant Warriors, who controlled the second half after a tight first half.

The Warriors took a 29-28 lead into the first break, with Curry and Harrison Barnes scoring eight points each, but Cleveland wrestled their way back into the game with a strong second half, taking  a five-point lead into half-time.

But that was as good as it got for the Cavs, who started the second half well, but an 11-point turnaround in the third saw the Warriors establish a two-point lead at the end of the third quarter, before running away with the game in the final period.

Game five is back in Golden State on Monday.