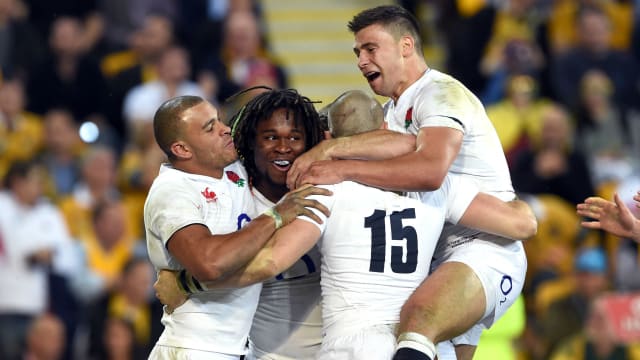 England recorded just their fourth away victory over Australia as Eddie Jones' men held off a fierce late comeback to prevail 39-28 over the Wallabies in the opening Test in Brisbane.

Since taking over from Stuart Lancaster following the disappointment of last year's World Cup group-stage exit, Jones has guided England to seven wins from as many matches - including a Six Nations Grand Slam success.

But Saturday's result at Suncorp Stadium was arguably England's most impressive feat of the Australian's tenure, coming in the back yard of Michael Cheika's losing World Cup finalists.

Scores from Jonathan Joseph and Marland Yarde - after tries from Michael Hooper and Israel Folau had given the hosts an early 10-0 lead - helped England's cause, but it was Owen Farrell's 24 points from the tee that ultimately made the difference.

The visitors were outscored four tries to three as Hooper and Tevita Kuridrani touched down in the second half for Australia, who got to within four points with three minutes to go, but replacement Jack Nowell's last-gasp try secured England's 1-0 lead in the three-match series.

Australia, who beat England in the group stages of the World Cup, made a strong start and were rewarded for their early pressure when Samu Kerevi sent Hooper over in the right corner in the 10th minute.

England did their best to weather the storm, but the Wallabies were unrelenting and a superbly timed pass from Bernard Foley freed Folau to charge over with ease.

Farrell got England back in the contest with a couple of simple penalties and, after Foley saw a try ruled out for blocking, another successful kick reduced the deficit to just one point on the half-hour.

And the visitors were in front shortly afterwards as fumbles from Foley and Kuridrani allowed Joseph to pick up and touch down, Farrell adding the extras.

Foley and Farrell traded subsequent penalties as England took a 19-13 lead into the interval, which was stretched further early in the second period.

An excellent break from James Haskell set the foundation for George Ford - on as a first-half replacement for the injured Luther Burrell - to fling the ball wide to the right where Yarde crossed unopposed.

Australia prop Scott Sio was sin-binned for an infringement at the scrum, before two more Farrell penalties sandwiched Hooper's second try of the game close to the hour.

Farrell was unerring from the tee once more to further punish Australia indiscipline, but Kuridrani's try and a Foley penalty set England nerves jangling.

Jones' men were not to be denied, however, as a clever kick from Ford set up Nowell to score in the left corner, Farrell capping a fine display with an excellent conversion.