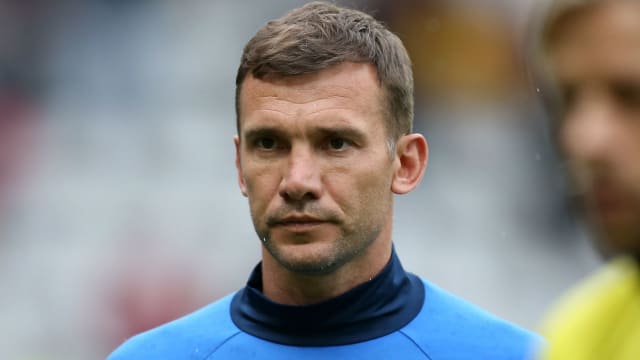 Andriy Shevchenko says in-form Ukraine are "up for the challenge" of facing world champions Germany at Euro 2016.

Ukraine's first match of the tournament is a daunting assignment against the 2014 World Cup winners in Lille next Sunday.

Mykhaylo Fomenko's team have won both of their two warm-up friendlies against fellow finalists, beating Romania 4-3 and Albania 3-1.

And assistant coach Shevchenko, who captained his country as a 35-year-old on home soil at Euro 2012, feels there is plenty of reason for optimism ahead of the meeting with Joachim Low's side.

"We have done well in the friendlies against Romania and Albania," he said.

"The lads are in good shape, we played great football. Now we wait for the day, on the 12th, when we will play against Germany.

"Definitely our group is not easy at all, I believe it will be tough. Poland has got a very solid team and Northern Ireland are very good as well.

"What about Germany? They're world champions but I feel like we're up for the challenge. [The] players are feeling great, there is great enthusiasm in the group and we hope to do very well at the Euros."

Shevchenko, who played some of his best football for AC Milan between 1999 and 2006, believes the Azzurri under former Juventus player and coach Antonio Conte could make an impact in France.

"I've always liked Conte, they're very disciplined. Italy has great talents in the squad, now they've brought [through] some young players - Italy will be tough to break down."

Ukraine's best performance at a major tournament to date was reaching the quarter-finals of the World Cup in 2006, when they lost 3-0 to eventual winners Italy.