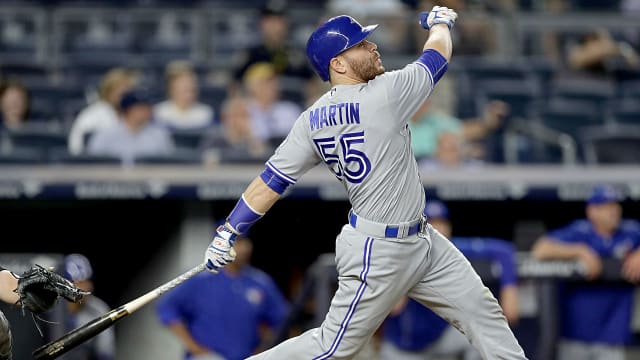 The 33-year-old ended a 124 at-bat homer-less drought, hitting his first and second home runs of the season in the victory at Yankees stadium.

Michael Saunders also went deep for the Blue Jays, with the two becoming the first Canadian team-mates in MLB history to hit home runs in the same inning.

Nomar Mazara hit a 491-foot solo homer, sparking a three-run rally that propelled the Texas Rangers to a 15-9 win that clinched a series victory over the Los Angeles Angels.

Boston Red Sox outfielder Jackie Bradley Jr extended his hitting streak in a 10-3 win over the Colorado Rockies, the Los Angeles Dodgers swept the Cincinnati Reds with a 3-1 victory, Steven Matz helped the New York Mets blank the Washington Nationals 2-0, and the Minnesota Twins avoided a sweep by the Kansas City Royals with a 7-5 come-from-behind win.

The Chicago Cubs have now won in Jake Arrieta's last 23 starts - a franchise record - as they held on for a 9-8 win over the St Louis Cardinals, the Philadelphia Phillies were 8-5 winners over the Detroit Tigers, the Cleveland Indians edged the Chicago White Sox 4-3 and the Pittsburgh Pirates held on for a 5-4 triumph over the Arizona Diamondbacks.

The San Francisco Giants beat the San Diego Padres for the ninth consecutive time with a 4-3 win, the Milwaukee Brewers needed 13 innings to see off the Atlanta Braves 3-2, the Seattle Mariners crushed the Oakland Athletics 13-3, the Miami Marlins downed the Tampa Bay Rays 4-3 and the Houston Astros beat the Baltimore Orioles by the same scoreline.

The Rangers' right fielder hit the biggest homer of the MLB season as Texas went on to clinch the series against the Angels.

Left-handed Mariners slugger Adam Lind went four-for-four with two home runs and six RBIs as his side routed the A's.

A pair of left-handers square off on Thursday as the Blue Jays' J.A. Happ (5-2, 3.43 ERA) takes on the resurging Yankees star CC Sabathia (3-2, 3.41 ERA), who had a great start last time out, throwing six innings of one-run, three-hit ball against the A's.