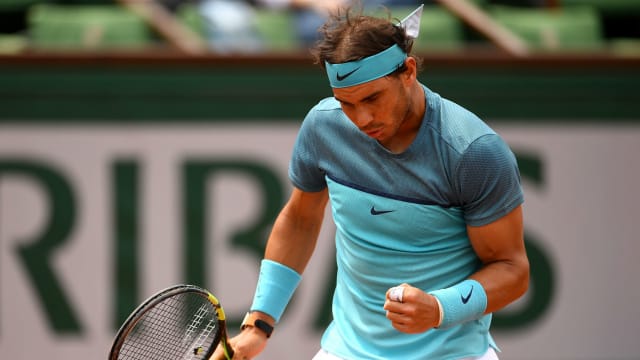 Rafael Nadal became only the eighth man in history to win 200 grand slam matches by recovering from a shaky start to saunter into the third round of the French Open with a straight-sets victory over Facundo Bagnis.

Nadal was broken in the first game of the match but the nine-time French Open champion responded in emphatic fashion, coasting to a 6-3 6-0 6-3 win in a one-sided encounter on Court Philippe Chatrier.

The fourth seed took only 80 minutes to hammer Sam Groth in the first round on Tuesday and wasted no time in winning his first meeting with fellow left-hander Bagnis, who has never progressed beyond round two in Paris.

Fourteen-time grand-slam champion Nadal will face either Nicolas Mahut or compatriot Marcel Granollers in round three.

Nadal lost just three games against Australian Groth, but paid for a poor start two days later when he went 0-40 down and netted a backhand to give the world number 99 from Argentina a surprise break.

But the Spaniard was soon charging around the court in vibrant fashion and levelled at 2-2 when a Bagnis overhead hit the net and landed in the tramlines.

A vibrant Nadal had the bit between his teeth, breaking again when the startled Bagnis netted a backhand and wrapping up the set in a flash when the underdog hit long after a lengthy rally.

The world number five was in no mood to hang around, unleashing a cross-court forehand past Bagnis to break in the first game of the second set and executing a cushioned volley to go 3-0 up.

Bagnis was unable to pull himself off the ropes and trailed by two sets in quick time when he put too much on a return, with Nadal showing no mercy as he broke again in the first game of the third set and saved two break points in the next.

Nadal's run of nine games in a row came to an end when Bagnis held to make it 2-1, but normal service was resumed as the man dubbed 'King of Clay' secured another emphatic win.