Cavs one win away from NBA Finals after routing Raptors 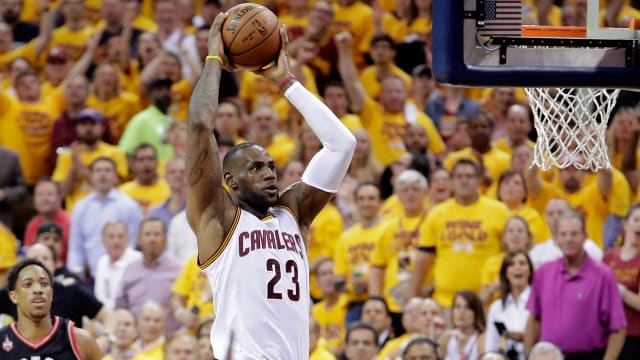 The Cleveland Cavaliers regained the lead in their NBA Eastern Conference final series with a 116-78 demolition of the Toronto Raptors in game five.

Cleveland opened the play-off matchup with consecutive wins but the Cavaliers were handed a wakeup call following back-to-back defeats to the Raptors, having threatened to sweep their way into the NBA Finals.

But normal service resumed via the 38-point humiliation in Cleveland on Wednesday as the Cavaliers took a 3-2 lead in the best-of-seven series, moving to within a game of the NBA Finals for a second successive season ahead of Friday's trip to Toronto.

The Cavs outscored the Raptors 37-19 in the first quarter and the east's top seed never looked back, leading 65-34 at half-time.

Cleveland's big three came up big as LeBron James, Kyrie Irving and Kevin Love all had 20 points or more.

James posted 23 points, eight assists and six rebounds, Iriving also registered 23 points, while Love led the Cavs with a game-high 25 points and such was the trio's dominance, they were able to sit out the final period.

While James, Irving and Love all performed, Toronto's All-Star duo failed to deliver.

Kyle Lowry was five-of-12 from the floor for 13 points and DeMar DeRozan was two-of-eight in his 14-point haul on the road.