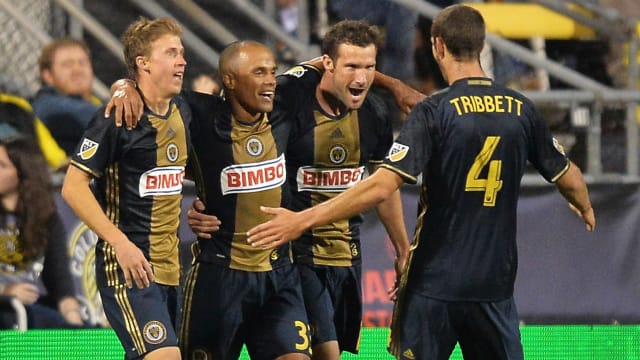 Ken Tribbett scored his first MLS goal as Philadelphia Union fought back from a controversial few moments to secure a 2-2 draw at Orlando City on Wednesday.

Orlando came from behind to take the lead with 20 minutes remaining as Cyle Larin's strike was adjudged to have crossed the line despite Fabinho's effort to keep the ball out.

Replays were inconclusive but it appeared the whole of the ball did not cross the line, however Tribbett struck back four minutes later to ensure the points were shared in Orlando.

Orlando had the chance to take the lead in the first half but Philadelphia goalkeeper Andre Blake came up big to deny Brazil international Kaka from the penalty spot.

After a scoreless first period it was the Union who took the lead in the second, with Tranquillo Barnetta smashing home from close range following Chris Pontuis' header.

However, Orlando turned the game on its head in the space of three minutes, with Kevin Molino and then Larin scoring to put the home side 2-1 up.

Both were scored in controversial circumstances, with Blake appearing to have been fouled in the lead up to Molino's goal, just minutes before Philadelphia's Warren Creavalle was taken out in the box

But Philadelphia managed to put the frustrations behind them, with 23-year-old Tribbett scoring the equalising goal in just his sixth appearance for the Union.

Orlando were reduced to 10 men in stoppage time after David Mateos was shown a straight red for a high boot, but neither side could find a winner.

The point means Philadelphia extend their lead atop the Eastern Conference, while Orlando remain four points behind in sixth spot.