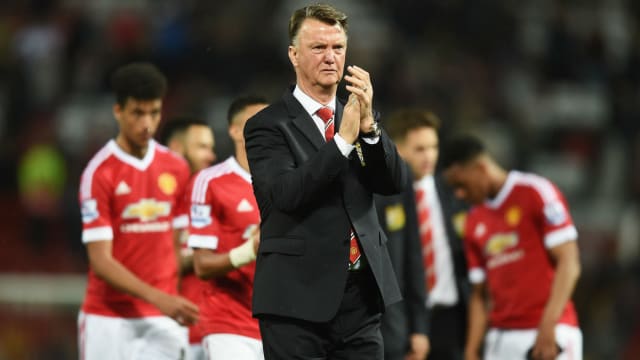 Manchester United manager Louis van Gaal says winning the FA Cup is essential for the club as a whole, and not just for his own future.

Aside from the Community Shield three years ago, United have not won a piece of silverware since Alex Ferguson secured the Premier League title in his final season in charge in 2012-13.

Van Gaal's position has come under increased scrutiny throughout the campaign, with United missing out on a Champions League place and having drawn heavy criticism for a cautious style of play.

But the former Bayern Munich and Barcelona boss says beating Crystal Palace in Saturday's final at Wembley means much more to the players and fans that it does to his chances of keeping his job.

"I think the fans are more concerned about the title than I am because a title for the fans is fantastic and we want to give it. I said that in my speech on the pitch. They were always there, unconditional. They've never let us down. They deserve it more than anyone else.

"A club like United needs silverware. We need it and the players need it also. That's why it's so convenient when we win.

"It's always exciting when you are so close but close is not enough - you have to win it.

"I've read that the last FA Cup was 2004 so it's a long time ago. So for Manchester United, it's a big title, especially now.

"It's always important to win silverware. Qualification is not a title - a title is the FA Cup, the championship. For players, it's very important, because they can hold the cup, and that's an exciting moment. Especially in England, because the FA Cup is a big title. It's the most prestigious temple of England."

Van Gaal believes that away victories against Shrewsbury Town, Derby County and West Ham prior to the 2-1 semi-final win against Everton underline that his side would be worthy winners of the trophy.

"We have played four of the six matches away, so we deserve to win, I think, because when you win away at West Ham United, for instance, it's fantastic," he said. "Although Crystal Palace beat Tottenham, so it's deserved for them to be in the final."

Van Gaal - who will have Marouane Fellaini back from suspension and Marcos Rojo and Matteo Darmian fit again - admits it will be tough to leave certain players out of the side but considers the occasion to be a vital learning curve for the youngsters in the squad.

"There are many players there. Fellaini is not suspended, Rojo and Darmian are not injured any more. There are a lot of fit players," he added. "That's more difficult for me because now I have to disappoint a lot of players.

"It's also why we need matches at this level - it's an education for young players. You have to win, and you have to cope with that pressure."