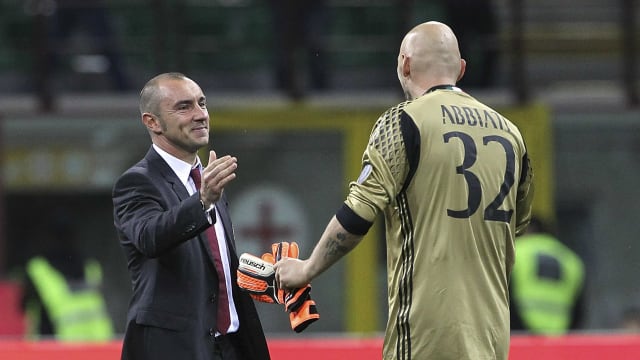 With AC Milan on the verge of their Coppa Italia final showdown with Juventus, Cristian Brocchi insists the game will not decide his future as the club's coach.

Brocchi was appointed following the sacking of Sinisa Mihajlovic last month but guided Milan to just two victories from his six Serie A matches in charge.

However, asked by La Gazzetta dello Sport whether defeat in the final would harm his chances of remaining in the job, he replied: "I don't think so. In any case, this experience will rest on my conscience.

"I am convinced that the work I bring to the table, with the right time, can bring the right results. And after 35 days as Milan coach, I feel even stronger character-wise."

Despite his apparent confidence, Brocchi recognised his team's shortcomings in their final game of the Serie A campaign last Saturday - a 3-1 home defeat to Roma.

"I won't accept the idea that if we don't win, we aren't motivated," said the Milan boss.

"The disappointment of the game against Roma was realising that the team was not ready for the final.

"Now I have clear ideas about who cannot give me anything. I will not give an alibi to the team."