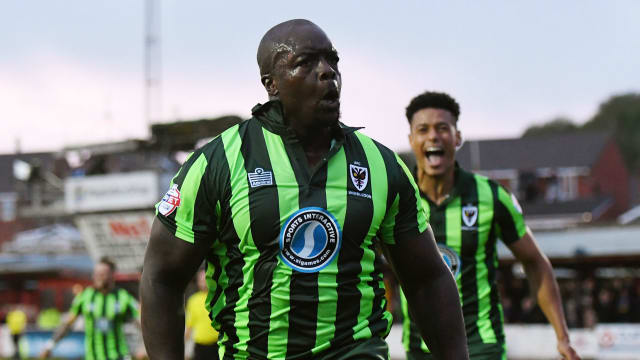 Adebayo Akinfenwa and Lyle Taylor were the heroes for AFC Wimbledon as a 2-2 draw after extra time was enough to send them to the League Two play-off final at the expense of Accrington Stanley.

Leading 1-0 from the first leg, Wimbledon were staring down the barrel of an aggregate defeat as Josh Windass' penalty and Piero Mingoia's stunner put Accrington 2-0 ahead on the night at the Crown Ground.

But substitute Akinfenwa levelled for the visitors to force an additional 30 minutes on Wednesday, and Taylor netted the winner for a 3-2 aggregate victory that sends Neil Ardley's men to Wembley.

Accrington, who missed out on automatic promotion on the final day of the season, levelled the aggregate score in the 38th minute when Sean Rigg was adjudged to have tripped Scott Brown in the area and Windass nonchalantly converted the penalty low to the right.

The hosts made it 2-0 just shy of the hour when Mingoia let fly with a stunning 30-yard effort that had too much swerve for Wimbledon goalkeeper Kelle Roos and the ball nestled in the top right-hand corner.

But Wimbledon mustered a swift response and substitute Akinfenwa powered home a brilliant header when Accrington failed to clear their lines to level the tie once more.

That goal took the match into extra time, and the away fans were sent into delirium when Taylor drilled home the rebound after Jake Reeves had been denied following a superb jinking run.

Confusion then reigned as two floodlights went out causing a temporary delay to proceedings, but the match did reach a conclusion and Wimbledon - who take on Plymouth Argyle at Wembley - are now one win away from a sixth promotion since being formed 14 years ago.