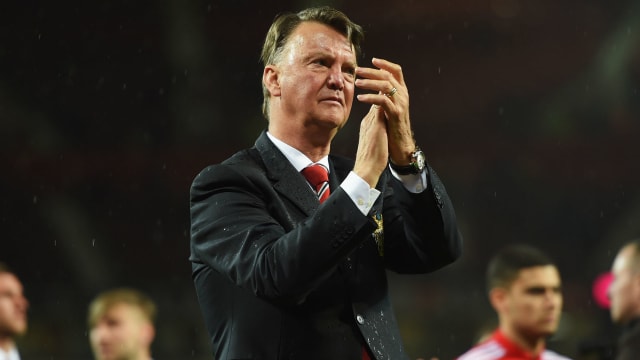 Louis van Gaal suggested Manchester United supporters must lower their expectations after he was booed in the aftermath of the club's concluding 3-1 Premier League win over AFC Bournemouth on Tuesday.

Captain Wayne Rooney scored his 100th Premier League goal at Old Trafford and turned in a stylish display from midfield, helping Marcus Rashford to celebrate his England call-up with a goal before setting up a third for substitute Ashley Young.

Van Gaal was displeased by a Chris Smalling own goal in stoppage time that prevented goalkeeper David de Gea from claiming the Premier League's Golden Gloves prize for the most clean sheets this season and the Dutchman's evening took another downturn after full-time.

Old Trafford was far from capacity for the re-arranged match - the initial game having been abandoned after a suspicious package was found inside the stadium on Sunday.

But many of those in attendance made themselves heard by booing loudly when Van Gaal was introduced for his end-of-season address.

He seemed to win some of his detractors around by talking up United's prospects of victory in this Saturday's FA Cup final against Crystal Palace, but a fifth-place finish in the top flight and failure to secure Champions League football for next season has damaged Van Gaal's stock and heightened speculation he will be replaced by former Chelsea and Real Madrid boss Jose Mourinho.

Speaking last week, Van Gaal said the notion of United winning this season's Premier League - scooped by 5,000-1 underdogs Leicester City - had not been "realistic" and he picked up the theme in a post-match interview with Sky Sports.

Asked if he understood the booing, he said: "Of course, because as I have said the expectation is very high, especially the fans.

"We are a team in transition and this I said when I started here in Manchester United.

"Maybe I have to bring over the message much clearer than I have done."

United ended the season with 49 goals to their name - only five more than relegated Newcastle United.

Van Gaal acknowledged the attacking deficiencies but pinpointed a raft of injuries in November and December as the key moment in a stuttering campaign.

"More or less [not scoring enough goals] is the issue but I think the issue is the amount of injuries in the months of November and December.

"It was particularly in two positions - the two full-back positions. That was very tough at that time.

"I have also said in the season that we need creative, fast attackers. I said that, so we have to take care of that.

"But nevertheless, when everybody was fit we were first in the league and these are the facts."